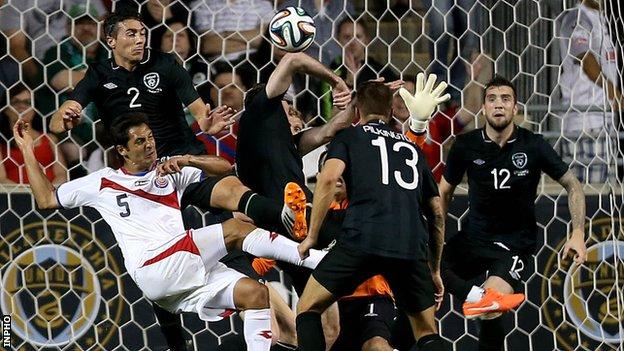 Derryman Shane Duffy savoured his Republic of Ireland debut on Saturday morning four years after a life-threatening injury wrecked his hopes of earning a first cap.

Duffy had been promised a first cap by Giovanni Trapattoni against Paraguay back in 2010 before suffering a lacerated liver in Republic training.

"It's been a long four years" said Everton defender Duffy, 22.

"Playing the other night was sort of a reward for four years ago."

Duffy played his part in a 1-1 draw in Philadelphia with World Cup finalists Costa Rica, who fought their way back from 1-0 down despite having defender Giancarlo Gonzalez sent off before the break.

"I am made up to be even in the squad, so to play was a dream," added Duffy, who thought he was going to die after the freak training ground incident in May 2010.

Duffy was forced to undergo life-saving surgery after losing 3.6 litres of blood, around two-thirds of his supply, but returned to action within 10 weeks.

"Obviously when you start playing football, you want to play for your country, so I was delighted when it actually came.

"I thought I did all right in the game, some good things, some bad things but it's the first step and hopefully I can do better stuff."

Duffy lined up in a much-changed defence along with Richard Keogh, Stephen Kelly and Marc Wilson, the latter of whom had to make way for emergency left-back James McClean because of injury.

However, the degree of difficulty will only increase during the early hours of Wednesday morning when Ireland face Portugal at the Metlife Stadium in New Jersey.

Martin O'Neill's defensive resources have been significantly depleted since the squad met up in Dublin with John O'Shea, Seamus Coleman and Damien Delaney not having travelled to the US and Stoke's Wilson not expected to recover from a tight hamstring in time for Wednesday's game.

In addition, midfielder Glenn Whelan will miss the game after flying home for personal reasons.

Full-back Stephen Ward has rejoined the squad after flying in on Saturday evening, but Duffy is hoping he might get another chance to impress.

He said: "As soon as you have played one game, you want to play more.

"I don't know how I did, but I just went out there and did the best I could do, and on Tuesday I will be ready if I'm picked."

Duffy spent last season on loan in the Championship at Yeovil, who ultimately slipped out of the division after a lengthy battle against relegation.

However, the experience he gained at Huish Park proved invaluable, and Duffy, who made 39 appearances, is grateful for the opportunity afforded him by the Glovers.

"It's been brilliant for me down there. It's got me where I am now, so it's credit to Yeovil for giving me a chance to be in the senior squad."