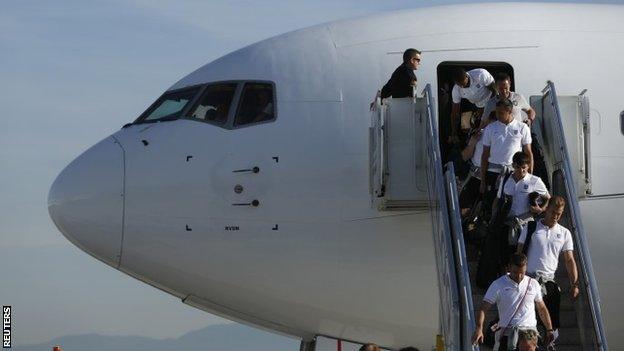 England have arrived in Brazil ahead of the start of the 2014 Fifa World Cup.

Roy Hodgson's side ended their preparations with a 0-0 draw with Honduras in Miami on Saturday night.

England will be based at the Royal Tulip Hotel, south of Rio's city centre and will be training on a secure military base underneath the imposing Sugar Loaf mountain.

England open their World Cup campaign against Italy on Saturday, 14 June, a game you can see live on the BBC.

They then face Uruguay on Thursday, 19 June before ending Group D against Costa Rica on Tuesday, 24 June.

Saturday's friendly against Honduras was delayed by more than 40 minutes because of a thunderstorm and England were on the end of some heavy challenges in a bad-tempered second half.

The squad and staff flew to Rio straight after the game.

Manager Hodgson was relieved to escape without any injuries and now has six days to prepare for the Italy match.

"England, for once, are not burdened down by huge weight of expectation but the prospect of playing a World Cup in the game's spiritual home is engendering great excitement."

He said: "It has been three excellent weeks of preparation.

"The squad is growing stronger, they are bonding together very well and the mood is one of quiet optimism and a reasonable degree of confidence.

"That is all you can hope for.

"Now is when the real football begins and I am happy that we are in good spirits and the players have really done as much as we could ask of them."

There will be 31 matches shown live on BBC television and online, starting with Spain v Netherlands on Friday 13 June, with 24 days of live coverage on BBC Radio 5 live.

There will be live text commentary on all 64 matches throughout the tournament, available on the BBC Sport website and app for mobile, tablet and connected TV.