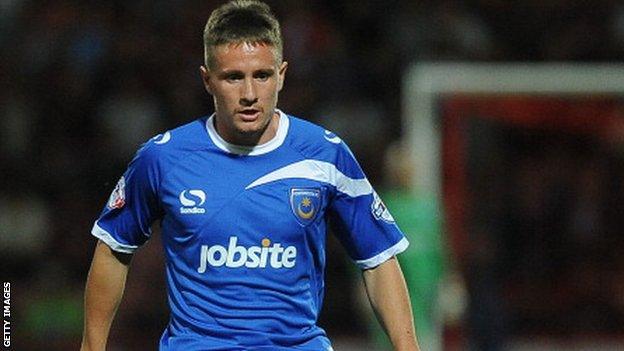 Dundee have made their sixth summer signing with the arrival of midfielder Simon Ferry from Portsmouth.

"I'm extremely happy that we've signed Simon," Hartley told his club website. "He is young and dynamic and has proved himself in England at a decent level."

Former Hibs duo James McPake and Kevin Thomson and Alloa goalkeeper Scott Bain are among the club's other recruits.

Ferry left Portsmouth by mutual consent on Friday, before agreeing the switch to his home city.

Hartley expressed delight at securing his latest signing and believes he will boost their upcoming Scottish Premiership campaign.

"He [Ferry] played the last year as a sitting midfielder but I see his strengths in attacking and going forward with the ball," said the Dundee boss.

"I think the fans will really take to him and he is also a Dundee lad so he knows what this club means to the city."

Dundee chief executive Scot Gardiner said Ferry fitted the profile of the type of player they wanted to recruit.

"He is a good age, fits into the plan and we believe his best years are ahead of him," said Gardiner.

"The squad really is beginning to take shape and I'm sure the Dundee support will enjoy watching the team as it progresses next season."

Ferry began his career at Celtic before moving to Swindon in 2009. He joined Portsmouth last summer, scoring one goal in 22 appearances.