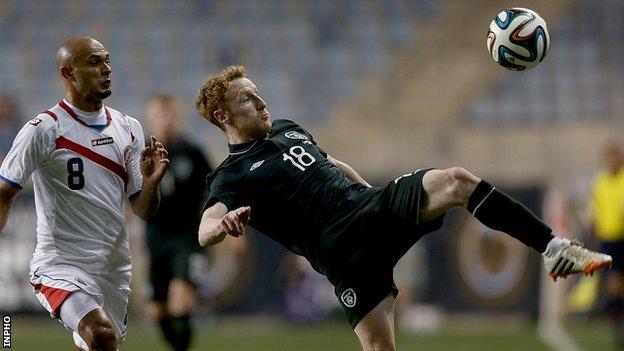 Republic of Ireland manager Martin O'Neill was disappointed with how his team coped with a numerical advantage during the 1-1 draw with Costa Rica.

Kevin Doyle gave the Republic the lead before 10-man Costa Rica fought back to draw the friendly in Philadelphia.

Giancarlo Gonzalez was sent off just before half-time for elbowing Doyle.

"I don't know if we got casual, but we had a really poor spell in the first fifteen minutes of the second half," said O'Neill.

Robbie Keane missed the opportunity to restore the Republic's lead when he had a penalty saved.

O'Neill made nine changes to the side which drew 0-0 with Italy last Saturday and felt that may have been a factor in the team's performance.

"We got a really good goal through Kevin Doyle and did really fine in the first half of the match, dealing with anything they threw at us reasonably comfortably. Then they had the man sent off.

"It took us time to get to grips and they played much better with the ten men than the eleven.

"Obviously I made a lot of changes in the team and that may have led to us being a bit disjointed. I felt in that 15-minute spell, we should have got out and closed them down a bit better than we did.

"It was their last chance before the World Cup and we had a few problems we didn't deal with in the manner we did against Italy.

"I thought their second-half performance with ten men was really excellent."