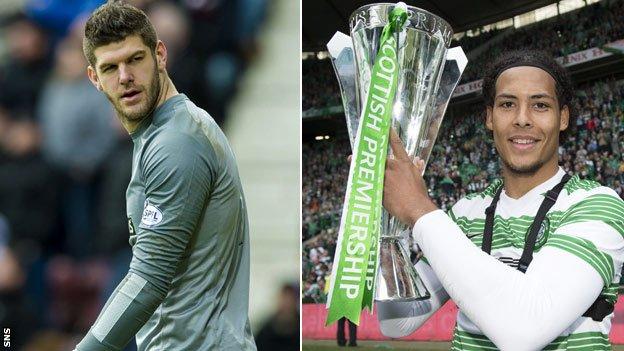 The Norwegian, who was appointed Neil Lennon's successor on Friday, is in the process of assessing his squad.

"We want to have good players here and I hope those two stay and be a part of the team this year so we can do very good things," said Deila.

If I do things well and make people around me happy and push the right buttons, we are going to get the right results

Deila guided Stromsgodset to the Tippeligaen title last season and won the Norwegian Cup in 2010.

And he will aim to guide Celtic through Champions League qualifiers, which begin next month.

Van Dijk has impressed at the heart of the Celtic defence since his £2.6m move from FC Groningen last June, while Forster has performed well in Europe in particular.

Lennon's successor insists he is unfazed at the prospect of clubs circling his star players.

"It is not a fear," he said. "It is football. We have to be ahead all the time. We always have to be one step in front."

Deila, who has signed a 12-month rolling contract, also distanced himself from comparisons with Borussia Dortmund boss Jurgen Klopp.

"No, I am Ronny Deila," he explained. "The board will see what I am doing with the club. That is important.

"If I do things well and make people around me happy and push the right buttons, we are going to get the right results. If the performances are good then the results will come.

"I want to play offensive football, have the game under control with the ball and create chances. And especially at the home games, we are going to give the fans entertaining football.

"And of course, [I want] to win trophies and develop players and the staff. Everyone needs to progress and if we can do that we can achieve big things."

Celtic begin their next campaign on 15/16 July with a Champions League qualifier against an as yet unconfirmed round-two opponent.