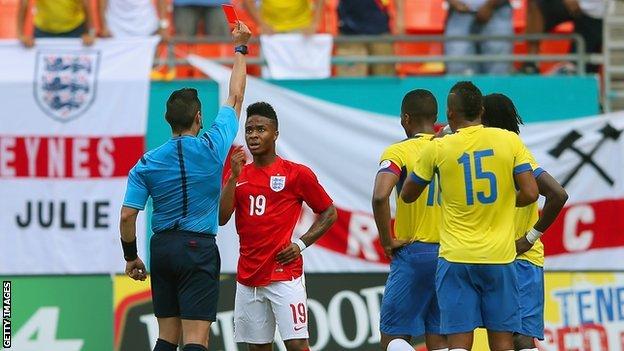 England manager Roy Hodgson says Raheem Sterling's red card in the friendly against Ecuador in Miami will not have any impact on his World Cup hopes.

The Liverpool winger will miss Saturday's friendly with Honduras after being sent off on Wednesday.

Hodgson described Sterling's performance in training on Friday as "breathtaking" and "unstoppable."

"He was gutted to get sent off, as were we, but he doesn't seem to have taken it to heart," said Hodgson.

"And the most important thing is that, with his performances, he's still making me very much aware that this is a player who can do an awful lot of damage to the opposition. He really is an exceptional talent, alongside the other exceptional talents we have.

"They will go up and down and if I try to protect Ross Barkley I make no apologies for that because I have seen people after a good performance get praised to the skies only to be brought down to earth with a massive bump.

Sterling's Liverpool and England captain Steven Gerrard said: "Raheem's very resilient. You judge a player on their reaction to a setback and he was the best in training this morning, he looked very sharp and very lively.

"I said to him in the dressing room that it was important how he reacted, it was important he was the best in training between now until Saturday's game and put yourself back in the frame to start against Italy and he has started to do that.

"We've talked it out, he's talked it out with Steven Gerrard. The blow is he can't play against Honduras when I would have liked to have seen him play."