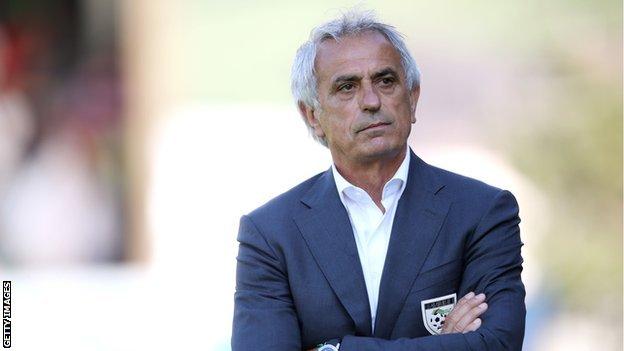 Algeria coach Vahid Halilhodzic is full of optimism ahead of the World Cup after his side beat Romania 2-1 in a friendly featuring a bizarre incident.

The players were taken off for half-time two minutes early after fans threw bottles and lit flares, and returned to complete the half before immediately starting the second 45 minutes.

It was the Desert Foxes' final friendly before heading to Brazil.

Victory for Algeria, who have lost once in 13 matches, came on the back of a 3-1 defeat of Armenia.

"We have a lot of optimism and confidence as we go to the World Cup," said Halilhodzic.

"It's the best match since I arrived - tonight we showed we have the quality to play in matches like this.

"We showed we are capable of building a good game and being disciplined."

Alexandru Chipciu levelled seven minutes later as he beat the offside trap and rounded goalkeeper Rais M'Bolhi, who had charged out of his penalty area.

But when trouble flared two minutes before the break, Swiss referee Nikolaj Haeni took the players off, and Halilhodzic went onto the pitch to appeal for calm.

After a 15-minute break, the teams played out the final two minutes of the first half before immediately changing ends for the restart.

El Arabi Soudani's winning goal - on 66 minutes - prompted about 15 fans to run onto the pitch, while about 1,000 did likewise when the final whistle blew.

Many dispersed after water sprinklers were turned on, though some continued to clash with stewards in one corner of the pitch.