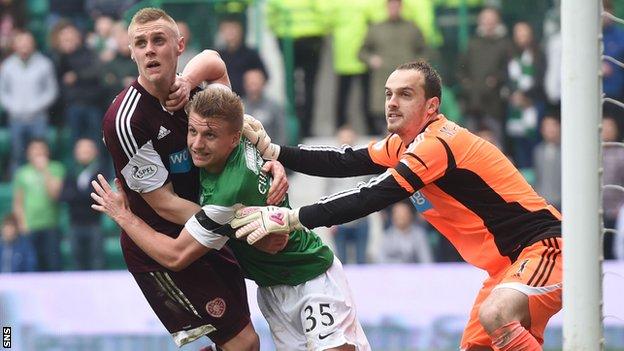 Attendances at Scottish Championship clubs could double next season and the division's average gates could exceed those in the Premiership, according to a football finance expert.

Neil Patey confirmed to BBC Two Scotland's 'Scotland 2014' programme that the second tier was in for a boom.

It is a result of relegation for Hearts and Hibernian, plus Rangers' promotion.

"It's entirely conceivable attendances in total will be up between 50% to 100% for the bulk of clubs," said Patey.

"Just using some pretty conservative figures, you could easily see income going up between £200,000 to £300,000 for the average Championship club.

"If you add in additional matchday sponsorship merchandising, it could exceed £300,000 to £400,000, which is a big chunk of income for the average Championship club."

As well as the continued absence of Rangers, traditionally Scotland's biggest-supported club along with Glasgow rivals Celtic, the Premiership will be minus both Edinburgh clubs, who potentially have the third and fourth biggest supports.

The top flight will have a new city derby after Dundee won the Championship to join neighbours United, but Hamilton Academical's play-off win over Hibs means the two Edinburgh clubs will be face to face in the second tier.

"If you look at the composition of the Championship and the Premiership and the teams that are going to be there, there's only about a 700-800 differential in average attendances," explained Patey, a partner with Ernst and Young.

For a club like Raith Rovers, visits by Hearts, Hibs and Rangers could result in around 4,000 travelling fans making the trip to Stark's Park six times during the season.

The Kirkcaldy club are installing hundreds of new seats to meet the demand and other Championship clubs are following suit.

Rovers chairman Turnbull Hutton said: "We've actually sold more season tickets up to the end of May than we've sold for last season and we still have the other surge we expect in July.

"So we're looking at probably record season ticket sales for this club for next season.

"A perfect storm has come together and we've got three clubs that normally would be expected to be in the Premier League are in the Championship.

"And it's not just going to be a blip for the Championship because, with the best will in the world, only two of these clubs can go up - and those of us in the Championship still have ambitions as well."

The extra money means a club like Rovers are now able to spruce up their old stadium, install a new PA system and strengthen the squad.

It also means the players get a bus to take then to away games next season - in recent years, players have sometimes had to make their own way, while at other times the money to pay for a team bus has come directly from the pocket of the chairman.

There is also fresh interest from television companies in screening Championship matches, although that is unlikely to translate into millions of pounds of fresh revenue.