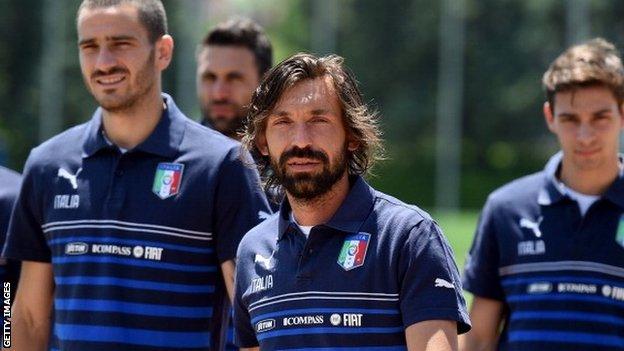 England cannot afford to underestimate Andrea Pirlo again when they face Italy in their World Cup opener in Manaus on 14 June, according to Paul Scholes.

The former England midfielder says Pirlo, 35, was allowed to dictate play when the teams met at Euro 2012.

And the Manchester United legend says Danny Welbeck should be deployed to man-mark the Juventus midfielder.

Scholes says Pirlo is the "world's greatest playmaker", adding: "Give him time and he will destroy you."

England drew 0-0 with Italy at Euro 2012 but lost 4-2 on penalties to bow out at the quarter-final stage.

Scholes, 39, said England's management are "well aware of Pirlo's threat" and warned they "cannot make the mistakes of 2012 again".

"We paid nowhere near enough attention to him," he added. "Pirlo is not renowned for his athleticism but that day he ran 11.58km, more than any England player.

"He also had more passes (131) than England's four starting midfielders."

The Red Devils beat Milan 4-0 at Old Trafford to seal a 7-2 aggregate victory and reach the quarter-finals.

"Park was the perfect man for Pirlo in 2010 and never gave him kick," said Scholes, who made 66 appearances for England. "You could even see Pirlo getting frustrated and having little kicks out by the end.

"It has always been a difficult game, playing against England. But it's one you look forward to, especially when it's during a World Cup or European Championship. It's the first game of the group stages, so it will be a tough and important one. Because new players have come in over the past two years we will expect something different from England. It's all to play for and the best team doesn't always go through."

"For Manaus, we need an 'English Park Ji-Sung', one England player designated to man-mark him," added Scholes.

"Looking at the squad, Danny Welbeck - a good defender who can nick the ball well - could be an option and would be a bold decision, one which gives England a creative outlet and saddles Pirlo with defensive work."

He highlighted the recent game against Peru, when England were 3-0 winners at Wembley but were far from convincing.

He says England looked particularly vulnerable down the right and is worried the likes of Luis Suarez and Edinson Cavani will take advantage when England face Uruguay on 19 June in the second round of Group D games.

"James Milner or Jordan Henderson could be asked to give Glen Johnson extra cover down the right," wrote Scholes in his blog for bookmakers Paddy Power.

"When Johnson goes forward it leaves spaces and Gary Cahill will be exposed. It's got me worried."