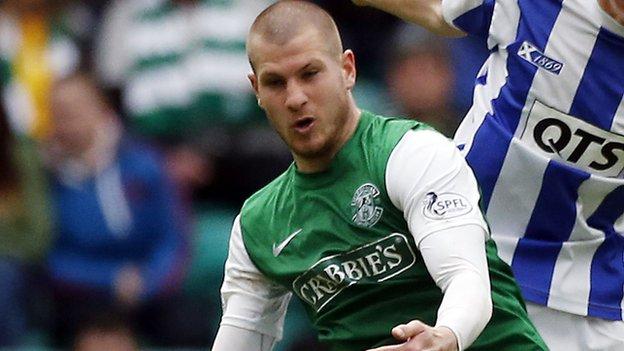 Shrewsbury Town have brought James Collins, the striker who fired them to promotion two years ago, back to the club from relegated Scottish Premier League side Hibernian.

Collins, 23, turned down the chance to stay at Shrewsbury in the summer of 2012, opting instead to join Swindon.

Collins on the mark

Collins has now signed a two-year deal with Shrewsbury, who have not divulged whether any fee is now involved.

"James has been our number one target," said Town's chief executive Matt Williams. "It is a fantastic signing for us.

"A lot of time and effort from the chairman and manager has gone into this deal."

After scoring 16 goals for Shrewsbury in 2011-12, Collins also ended up as top scorer with Swindon the following season with 18.

He was then involved in one of the few summer deals in which any SPL club other than Celtic paid money for a player, but managed just six goals in 40 appearances for Hibs, falling out of favour after Terry Butcher took over as manager from Pat Fenlon in November.

Chief executive Leeann Dempster said: "Everybody connected to the club would like to wish James all the best as he embarks on the next chapter of his career. We've agreed a mutually beneficial deal with Shrewsbury."

Collins, who has another year's option on top of his two-year contract, first joined Shrewsbury in January 2011 from Aston Villa and went on to score 24 times in 70 games in his 17 months at the Meadow.

He has an overall career tally of 55 goals, having also had loan spells at Darlington and Burton Albion.