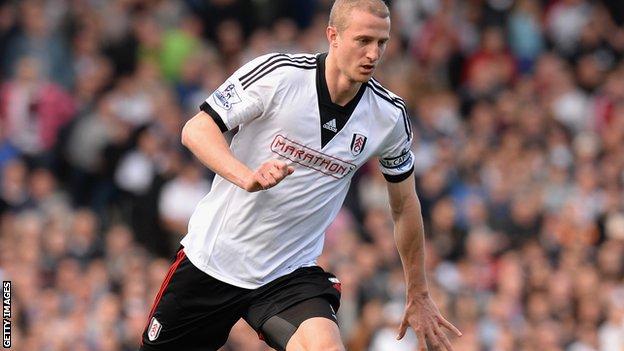 Former Fulham captain Brede Hangeland says he was "immensely disappointed" to be informed that his contract with the Cottagers was being cancelled via email rather than in person.

The defender, 32, is the latest player to leave the club following their relegation from the Premier League.

"I was told of this decision via email," he said in a statement.

"This was without anyone from the club having met me beforehand to discuss my contract or my future with the club."

Fulham, responded to Hangeland's comments by tweeting: "The club would like to clarify that all personal protocol was followed and that Brede Hangeland was notified in the right way."

Norway international Hangeland, who joined Fulham in 2008, had been under contract until 2015 but has been let go by manager Felix Magath as he prepares for life in the Championship.

Midfielders Damien Duff and Steve Sidwell have also been released, along with Giorgos Karagounis, Mahamadou Diarra and John Arne Riise.

Hangeland added: "After six and a half years of hard work and loyalty, and having served the last few years as captain, I am immensely disappointed at how this was handled.

"I believe I still have much to offer as a footballer and look forward to the next chapter in my career."