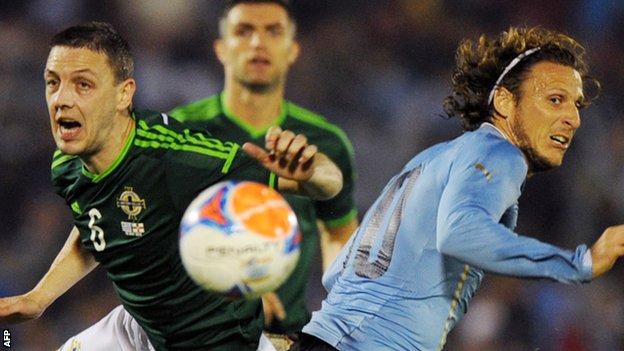 Northern Ireland manager Michael O'Neill could include another youngster against Chile on Thursday if Burnley's Chris Baird is unavailable.

Defensive midfielder Baird, 32, has had tonsillitis and either two-cap Conor McLaughlin, 22, or untried Liam Donnelly, 18, could step up.

"We have not ruled Bairdy out, we will leave that until the last minute, but he is a serious doubt," said O'Neill.

"He had it before the Uruguay game but played extremely well."

O'Neill added: "To be fair to Chris, many players probably would have asked to go home and he has not done that.

"He wanted to stay and give himself the best chance to play.

"For a senior player in particular, that is encouraging. It is the type of example we want. Bairdy knows we need him to play, so he is going to do everything possible."

With Jonny Evans, Gareth McAuley, Alex Bruce, Craig Cathcart and Rory McArdle all absent from the trip, O'Neill was forced to blood Doncaster defender Luke McCullough for the 1-0 defeat by Uruguay on 31 May.

Although he performed well, O'Neill is hoping he does not have to throw in another rookie against World Cup hopefuls Chile.