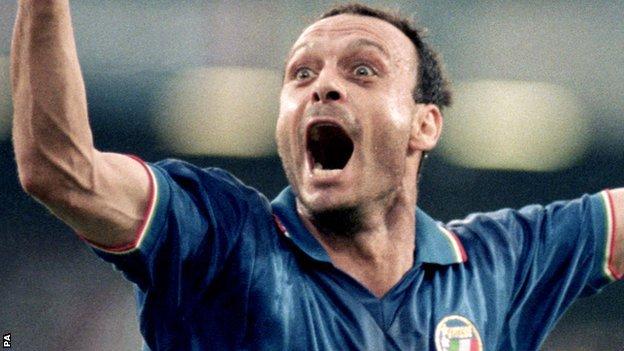 Salvatore Schillaci ended the 1990 World Cup as the most popular man in Italy. But he started it being attacked by 3,000 angry fans who trapped him in his car, spat at the windows and kicked the bodywork.

The eyes, the eyes. Every time I meet people they always want me to do the 'wild eyes'

That was his welcome to the Azzurri's pre-World Cup training camp in Florence, when he unwittingly drove into a riot sparked by his club side Juventus signing Fiorentina's star striker Roberto Baggio.

Schillaci, who had to be rescued by police, was the wrong man in the wrong place at the wrong time. Things could not have been more different later that summer, as he scored goal after opportunistic goal.

That he was in the Italy squad at all was unlikely enough. The swarthy Sicilian striker, who never went to school and grew up in poverty on the streets of Palermo's slums, had started his career nine years previously earning £1.50 per goal for a local amateur side.

True, he was now a £3m striker - the fee Juventus had paid Messina to sign him in 1989 - and had won the Uefa Cup and Coppa Italia, but he was still relatively unknown. He had just played his first season in Serie A at the age of 25 and his first international call-up was for the finals.

Schillaci had done it the hard way, but the man better known as 'Toto' - a shortened version of his Christian name - would make Italy's World Cup his own.

Six goals gave him the Golden Boot as the tournament's top scorer, the Golden Ball as the best player and hero status, despite the hosts falling in the semi-finals.

Twenty four years on, Schillaci is discussing the four weeks that have defined his life, the fall-out from his spectacular rise from nowhere to become one of the most famous footballers in the world, and what happened next.

He is surprised and amused to learn a charismatic champion Australian thoroughbred racehorse was named after him, but he knows of plenty of animals that were.

"Ha, that is new to me. I've heard about a lot of things, but never the horse!" the 49-year-old tells BBC Sport. "In that period I know a lot of people in Italy named their dog 'Toto' though."

It was not the only way his name came into popular usage. "When people arrived in Italy around that time the first thing they would say to the border police was, 'Toto Schillaci'," he adds.

"And a lot of Italians have told me that when they went abroad, the first thing people said to them when they found out they were Italian was my name. That makes me very happy."

His stint as an unofficial ambassador was brief. Injuries and a loss of form meant he scored only one more goal for his country after the World Cup, and he was discarded during an unsuccessful qualifying campaign for the 1992 European Championship. His legacy has lasted a lot longer.

"There have been times when people have just burst into tears when they meet me," Schillaci says. "It is great that when I meet people I see a big smile on their faces, they are so happy to meet me.

"I think success is hard won so it is nice when people still remember you. The tough thing is when people no longer appreciate you. So I don't mind the attention at all."

The fact it was his only moment in the sun means Schillaci belongs to Italia '90 as much as Italia '90 belongs to him. And, wherever he is in the world, he knows the request that is coming as soon as he is recognised.

"The eyes, the eyes. Every time I meet people they always want me to do the 'wild eyes'," Schillaci says with a laugh. "It was an instinctive gesture that has stuck in people's minds, and I have done it many, many times."

Whether he was pleading for a penalty or greeting another goal, that dark Schillaci stare would become a familiar sight on his ever-expressive face, starting straight after he came on in Italy's first game against Austria.

"I had got the last place in the squad so I did not even expect to be on the bench," Schillaci recalls. "I thought I would be watching from the stands.

"So, late in the game, with the score 0-0, when the manager Azeglio Vicini called me over and told me to get warmed up because I was coming on, I could not believe it. I asked him, 'do you mean me?'.

Sitting next to Schillaci was goalkeeper Stefano Tacconi, his Juventus team-mate, who told him to "go on and score a header like John Charles" and, emulating the Wales and Juve legend, he did just that with a bullet finish that, remarkably, was the first goal with his head all season.

"When I scored, I just started running and did not stop until I got to the bench, where I hugged Tacconi because of what he had said to me," Schillaci explains. "It was an immense joy."

Another substitute appearance followed in a narrow win over the United States, this time a fruitless one, before Vicini bowed to popular opinion and played Schillaci from the start, partnering him with Baggio against the Czech Republic.

They both scored in a 2-0 win and Italy's World Cup was finally up and running. "Italy in delirium with Schillaci-Baggio," read the headline on the front of Gazzetta Dello Sport. "How beautiful you are."

Two more goals followed, to sink Uruguay in the last 16 and Republic of Ireland in the quarter-finals, cementing Schillaci's hero status. He was seen as the saviour of the nation. Even Magic Nights - the official song of the World Cup - became his personal anthem.

By now, comparisons were being made with Paolo Rossi, the inspiration when Italy won the 1982 World Cup. "Rossi was a champion," Schillaci said ahead of a semi-final against Argentina that his side were expected to win. "I am an ordinary, modest guy. I just hope I can continue to do what I have been doing."

He did, opening the scoring with another poacher's effort, but this time it was not enough. Italy passed England's record of 499 minutes without conceding at a finals before their goal was breached in the second half - and the fairy tale was finished when they went out on penalties.

Every national newspaper in Italy used the headline "End of a Dream" while Gazzetta and Corriere dello Sport simply put "NO" in huge letters on their front pages.

Like Schillaci, Azzurri striker Ciro Immobile - who has just signed for Borussia Dortmund from Torino for £15.5m - is from the south of Italy, has had a spell at Juventus and has also played some seasons in Serie B.

Could he be the Schillaci of Brazil 2014? "Hopefully," Immobile said.

"I was only born in 1990. But the comparison doesn't faze me, it's nice to be compared to a player who has helped write the story of Italian football."

"We deserved to win," reflects Schillaci. "I think if we had beaten Argentina we would have gone on to win the World Cup."

That was not quite the end of the Schillaci story, however. The day before West Germany beat Argentina in the final, he grabbed his sixth goal of the tournament in the third-place play-off against England, putting him ahead of Czech Tomas Skuhravy as the tournament's leading goalscorer.

"After the tournament, I went away to somewhere quiet," Schillaci says. "Everybody wanted a piece of me but I just wanted to get away from it all, especially after the pain of our semi-final defeat."

The next time he made the headlines, it would be for a less savoury reason. The following November, he was banned for one game for threatening to have Fabio Poll shot after the Bologna player punched him during an on-pitch row.

By then, the goals were drying up too. He scored only five in the league in the 1990-91 season, and six the following campaign. An injury-plagued move to Inter Milan in 1992 failed to revive him and he ended his career in exile - albeit a lucrative one - as the first Italian to play in Japan's fledgling J-League.

While he was still in Serie A, and struggling to regain his World Cup form, Schillaci said: "Even if I were to drop out of the Italian team, I will still have with me for the rest of my life the wonderful memories of Italia '90."

He still has them now, after returning to his home city to run the youth academy he used to play for.

What is clear from talking to Schillaci is that, while he enjoys reliving past glories when he is asked to play in exhibition matches, he is also pleased his fame did not change him too much.

"I still live amongst the people and buzz around Palermo on my scooter," he explains. "I am one of the people, part of the community, people recognise me but don't see me differently because I am Schillaci or anything like that.

"These days I travel the world and people always treat me well at events where they remember that World Cup and the goals I scored. People still have an affection for me because of what I did and the way I did it.

"Naturally my mind turns to those times, which is nice, but there is always that regret that we should have won it, rather than just reaching the semi-finals."