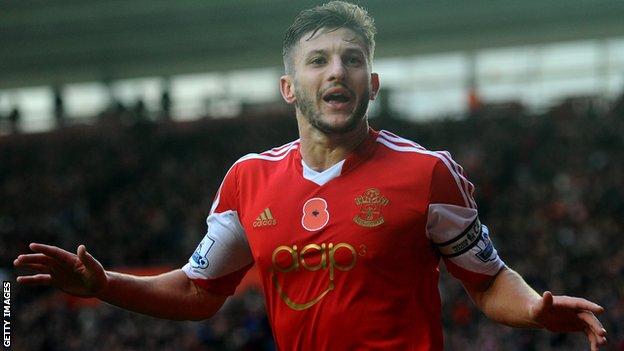 Southampton captain Adam Lallana has told the club he wants to be allowed to leave St Mary's when he returns from the World Cup in Brazil.

The midfielder has not put in a transfer request but has made his feelings known to Southampton.

Liverpool have made a £25m offer for the 27-year-old Saints captain.

Southampton and England team-mate Rickie Lambert moved to the Anfield club on Monday for a fee of about £4m plus add-ons on a two-year deal.

Saints had previously stated that no player will be sold until a replacement is appointed for coach Mauricio Pochettino, who joined Tottenham on 28 May.

Lallana scored nine goals in 38 Premier League appearances in 2013-14 and is hopeful that Southampton will appoint a new manager this week, allowing him to move before the World Cup begins.

He played 73 minutes of England's 3-0 friendly win over Peru at Wembley on Friday, his fourth senior appearance for his country.

He is currently in Miami with the England squad and manager Roy Hodgson has made it clear that he wanted all of the squad to have resolved their futures before the tournament gets underway in Brazil.

Lallana joined the Southampton academy as a 12-year-old and has progressed through the ranks as the club fought their way back from League One.

Southampton left-back Shaw has already been the subject of a £27m bid from United, who will hope to tie up a deal for the 18-year-old after the World Cup.