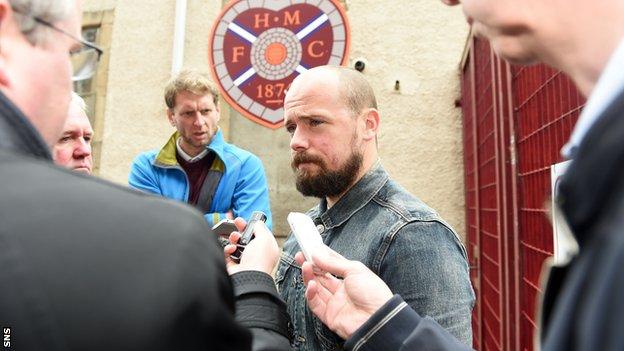 Jamie Hamill has returned to Kilmarnock after his summer release by Hearts.

The versatile 27-year-old has signed a three-year contract and will make his 150th appearance for the Rugby Park club when he makes his second debut.

Hamill played at right-back under Mixu Paatelainen at Rugby Park before being used more in midfield while at Hearts.

However, his three-year spell at Tynecastle ended after the administration-hit club were relegated from the Scottish Premiership.

In her first act as Hearts' new owner, Ann Budge dispensed with the services of Hamill and the club's other two most experienced players, Jamie MacDonald and Ryan Stevenson, along with Gary Locke and his management team.

Ayrshire-born Hamill had come through Kilmarnock's youth ranks and was capped for Scotland at Under-21 level.

"We are delighted to confirm that Jamie Hamill will be returning to Rugby Park after signing a deal which will keep him at the club until 2017," a Kilmarnock statement confirmed.