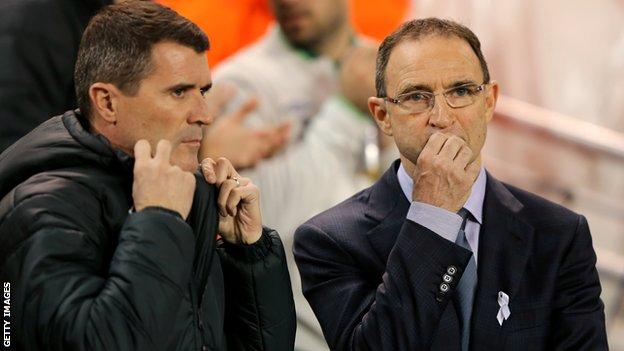 Roy Keane has decided to remain assistant boss with the Republic of Ireland despite holding talks about becoming the new manager of Celtic.

Ireland boss Martin O'Neill, who managed the Parkhead club for five years, had revealed the approach to the 42-year-old from Celtic last week.

But a source at the Scottish champions said: "Roy was not offered the job - no-one has been offered it yet.

"But he has ruled himself out and asked not to be considered for the position."

O'Neill had said he expected a decision on Keane's future before Wednesday, when Ireland fly out to the United States for friendlies against Costa Rica and Portugal.

The Football Association of Ireland said in a statement: "Roy Keane has confirmed he will travel to the US after deciding not to pursue talks with Celtic any further."

Irishman Keane finished his playing career with Celtic before management experience with Sunderland and Ipswich Town.

The former Manchester United midfielder became a strong favourite among bookmakers to succeed Neil Lennon at Celtic after O'Neill revealed that Desmond held talks with Keane last week about a return to Glasgow.

However, Keane, who combines his coaching duties with work as an ITV pundit, said on 23 May: "I've got a job - I've got two jobs - I can't have another one.

"They are a brilliant club, an absolutely fantastic football club, one of the best in the world. But I have got a job."

He later added: "I'm not taking a pay cut for anybody."

On that same day, Falkenberg had confirmed that their head coach, the former Celtic striker, Henrik Larsson, would be remaining with the Swedish top-flight club despite an approach.

Former Bolton Wanderers and Wigan Athletic boss and Celtic fan Owen Coyle had been linked with the job before Lennon took charge four years ago and avoided ruling himself out this time. He described it as "a marvellous job".

With Keane having now ruled himself out, former West Brom manager Steve Clarke has emerged as the bookmakers' new favourite.

The Scottish champions were initially thought to have been keen on former Manchester United manager David Moyes, while another former Celtic central defender, Malky Mackay, sacked by Cardiff City last season, has also been linked strongly with the vacancy.

Wigan Athletic manager Uwe Rosler has also been touted by some for Celtic, but Oscar Garcia, who had been linked with Parkhead after leaving Brighton, has just joined Maccabi Tel Aviv on a two-year contract.

Meanwhile, Celtic have announced that they will face Dynamo Dresden, who have been relegated to Germany's third tier, in a pre-season friendly at the Glucksgas Stadium on 19 July.

St Pauli will also provide opposition, in Hamburg on Saturday, 26 July, as Celtic gear up for their Champions League qualifying campaign.