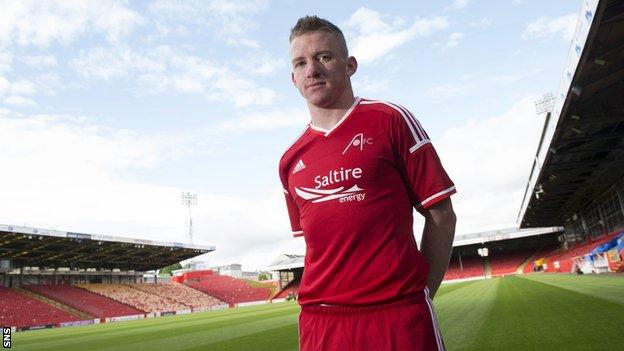 Aberdeen have signed a new three-year sponsorship deal they claim could be worth a seven-figure sum.

They have not revealed the exact value but say the agreement with oil services firm Saltire Energy extends beyond having its name on their shirts.

Aberdeen vice-chairman George Yule said: "We are absolutely delighted to have secured this partnership with Saltire Energy.

"They are also going to support all of our youth development teams."

The new sponsor will feature on the club's new home and away kits for next season.

Through its "Saltire in the Community" programme, it is already involved with many sporting programmes, such as AFC Youth, The Paul Lawrie Foundation, Saltire Energy Sports for Schools, University of Aberdeen Sporting Scholarships and Curling for Schools.

Now Saltire Energy's Mike Loggie was looking forward to building on his company's relationship with the club after their third-place finish in the Scottish Premiership and lifting of the Scottish League Cup.

"I am a long-standing fan of the club and admire the way they perform both on and off the pitch," he said.

"When we heard that there was an opportunity to become the official sponsor for AFC, we were keen to take over this prestigious title and strengthen our involvement with the club.

"This is such an exciting time for AFC. I am really looking forward to watching the club's run of success continue into next season and beyond."

Meanwhile, the Dons have sold more than 8,000 season tickets for next season.