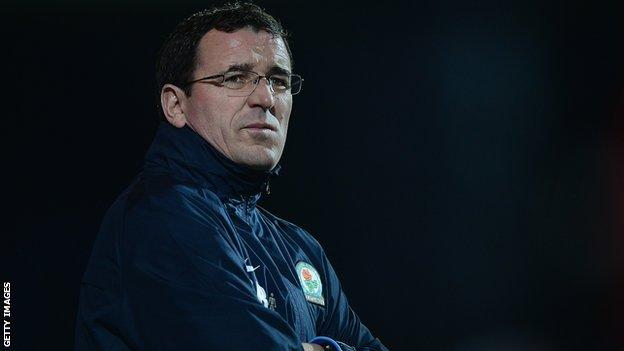 The 42-year-old guided Rovers to the verge of the play-offs in his first full season in charge at Ewood Park.

"I can assure you that we've had no contact at Blackburn Rovers over Gary and I very much doubt whether we will do," Shaw told BBC Radio Lancashire.

"Gary's very happy with his job at Blackburn and long may that continue."

In a statement on Blackburn's official website, Bowyer confirmed he wants to build on an impressive first season as Rovers manager.

"I recently met with the owners in India and those discussions were both positive and constructive," he said. "I am fully committed to building on the foundations we have put in place over the past 12 months.

"There is a strong sense of unity with all concerned at Blackburn Rovers and I look forward to that continuing as we plan for next season."

Leeds owner Massimo Cellino has said he wants to speak to as many as 10 candidates about the vacancy at Elland Road.

Bowyer became Blackburn manager on a permanent basis in May 2013 after two spells in caretaker charge.

They finished eighth in the Championship in 2013-14, two points below the top six.

However, Rovers put six players, including strikers Leon Best and DJ Campbell, on the transfer list last month as they attempt to reduce their wage budget to comply with Financial Fair Play regulations.

"We've had, and we still have, players on big money who are not in the squad," said Shaw.

"We've had to make settlements and brought new players in, but we're heading in the right direction.

"There were deals here overlapping from the Premier League and some deals that were done in the Championship that were costing the club a lot of money.

"We're trying to tidy that up and we've gone a long way down that road, but there's still a long way to go."