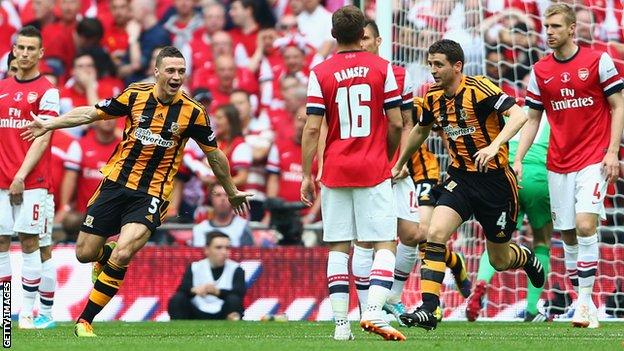 Defender James Chester has targeted a place in Wales' starting line-up when the Euro 2016 qualifying campaign begins in September.

The 25-year-old, who scored in Hull City's FA Cup final defeat by Arsenal, has committed to Wales and may play in Wednesday's game against Netherlands.

"I've come to international football because I want to play. I don't want to be sat on the bench," Chester said.

"It's up to me to prove myself to everyone that I'm good enough to play."

Warrington-born Chester struggled with a hamstring injury in the build-up to the FA Cup final, but started against Arsenal and scored the game's opening goal.

One of the reasons I've chosen to do this is to play against top teams like Holland, Bosnia and Belgium

Hull boss Steve Bruce had said he wanted the centre-half to rest in the close season rather than join the Wales squad.

But Chester was keen to meet up with his new international colleagues ahead of the Euro 2016 qualifying campaign.

"Even with the injury problems that I've had I felt it was important I come to this meeting to hopefully give me a chance of playing in the qualifiers," he said. "I felt this would give me the best opportunity to do that."

The friendly against Louis van Gaal's World Cup-bound side will be Wales' final game before their Euro 2016 campaign starts against Andorra on 9 September. Chris Coleman's side are in a group that also includes Bosnia-Hercegovina, Belgium, Israel and Cyprus.

Former Manchester United youth team player Chester is eligible to play for Wales as his mother was born in Rhyl.

"My mum said [when I was] growing up 'you'll play for Wales one day' so it's certainly made her very proud me coming here," Chester added.

"I don't think it took much persuading. I'm happy where my club career is at so the next step was to play international football.

"One of the reasons I've chosen to do this is to play against top teams like Holland, Bosnia and Belgium and to test yourself against the best players in the world. Hopefully it will improve me as a player."

Aaron Ramsey, whose goal ensured the Cup final did not have a happy ending for Chester and Hull, is not involved in the Wales squad. Neither is Real Madrid's Champions League winner Gareth Bale..

But Chester is looking forward to their involvement in the Euro 2016 qualifying campaign and believes Coleman's side have a chance of reaching the finals in France.

"Himself [Ramsey] and Bale are genuine world-class players. And the squad as a whole - the quality is probably as good as it has been for a while," Chester said.

"There's a lot of players playing in the Premier League and in the Championship, which is another tough division. There seems to be a lot of confidence around the place."