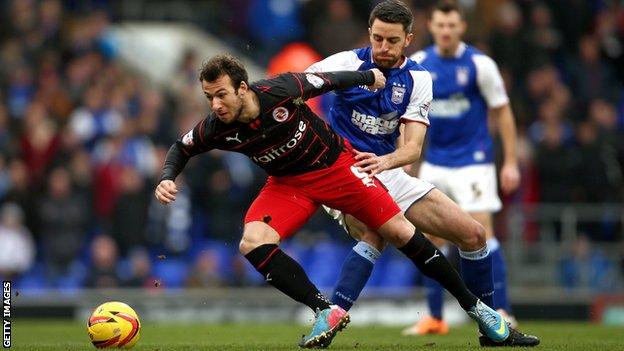 The 27-year-old joined the Bluebirds for an undisclosed fee from their Championship rivals.

He scored 15 league goals for the Royals and Wales defender Gunter says he will do well at City.

"You create one or two chances and your guaranteed he'll take one," said Gunter.

"I'm sure it won't be long before he's a proper fans' favourite there because he scores goals."

Le Fondre started his career with local club Stockport County in 2004, before moving on to Rochdale in 2007 and then Rotherham two years later.

A move to Reading followed in 2011, where he scored 12 goals to help the club to Premier League promotion.

He then found the net 12 times in 34 top-flight appearances as Reading were relegated after winning just six games.

The forward is Cardiff manager Ole Gunnar Solskjaer's fourth signing of the summer so far.

Gunter, who started his career with the Bluebirds, believes Le Fondre will have no problems finding his feet at the Cardiff City Stadium.

"He's a really good player," said Gunter. "I get on really well with Alfie [Le Fondre].

"It's really sad to see him leave us. He's certainly Cardiff's gain.

"I'm sure he'll settle in straight away, but hopefully not at the expense of Reading."