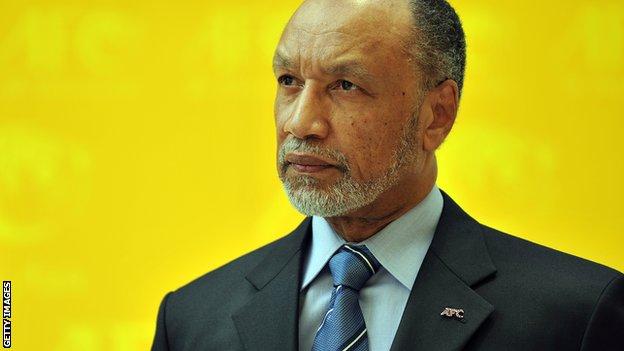 Ever since Qatar won the race to stage the 2022 World Cup more than three years ago, football's world governing body Fifa has faced calls to re-run the contest.

Whether it's the heat in the summer, the treatment of migrant labourers or allegations of corruption in the bidding process, Qatar has been under siege from critics who say it should never have been chosen to host the tournament in the first place.

But the Sunday Times leak is potentially the most significant development so far.

Over the course of the next month the newspaper is promising to publish a huge tranche of secret emails and documents which, it says, is proof that Qatar broke Fifa's rules on its way to that extraordinary victory.

Who is Mohamed bin Hammam?

Bin Hammam was initially banned from football for life in July 2011 after being found guilty of attempted bribery.

The allegations centred around bids to buy votes in the Fifa presidential election of that year.

However his ban was annulled a year later by the Court of Arbitration for Sport (Cas) which said there was insufficient evidence to support the punishment.

Bin Hammam then quit football saying he had seen the "very ugly face of football".

Fifa issued him with a second life ban in December 2012 for "conflicts of interest" while he was president of the Asian Football Confederation.

In March 2014, the Daily Telegraph reported a company owned by Bin Hammam had paid former Fifa vice-president Jack Warner and his family more than £1m. Payments were claimed to have been made shortly after Qatar won the right to host the 2022 World Cup.

Sunday's first instalment certainly produced enough compelling evidence to suggest that the head of Fifa's investigatory unit, the American lawyer Michael Garcia, is going to have to now include the claims in his long running inquiry into the World Cup bid.

At the centre of the allegations is Qatar's former Fifa vice president Mohamed Bin Hammam - at one stage one of the most powerful men in world football. He was kicked out of Fifa after he was caught offering bribes to Caribbean officials in his bid to oust Sepp Blatter as Fifa president in June 2011 - six months after the World Cup vote.

What the Sunday Times says it has uncovered is a covert campaign run by Bin Hammam to secure a groundswell of support for the Qatar 2022 campaign.

Using a construction company as a front, the paper says he paid bribes of £3m to football officials in Africa, Australasia and the Caribbean to guarantee that support.

Bin Hammam has always insisted he didn't actively lobby for his country. As president of Asian football he had to maintain neutrality in a contest which also included Japan, South Korea and Australia.

So far Bin Hammam has not responded to requests for comment from the BBC. But his son Hamad Al Abdulla did contact the Sunday Times to say that both his father and his family would not be responding to the articles.

Qatar 2022 also said Bin Hammam wasn't part of their bidding team - a stance they continue to maintain following the release of a statement on Sunday in which they say that he played no "official or unofficial" role for them.

And yet many of the emails and bank transfer records obtained by the newspaper's Insight team - some of which I have seen - appear to show that Bin Hammam was not only actively lobbying on their behalf but paying tens of thousands of pounds to officials.

One of the questions raised about the new evidence is whether the alleged payments, if proven, could have been part of his longer term plan to secure the Fifa presidency?

Of course it's possible but many of the documents go back to 2009 - a year before the World Cup vote and almost two years before the presidential election.

And besides, there was just six months between the two big elections. Could it be that they were co-ordinated - win Qatar the World Cup, then win the presidency for Qatar's Bin Hammam?

Furthermore some of the emails sent by African delegates following a visit to Doha in December 2009 and the African Football Conference (Caf) in Angola in 2010, seem to show that Bin Hammam was trying to convince them to support Qatar. Many write to him talking specifically about the country's World Cup ambitions, not his presidential plans.

On Monday the president of Caf Issa Hayatou issued a strong rebuttal of the Sunday Times allegations saying they were part of a "smear campaign" designed to discredit not only him but an "entire continent".

So the key question is whether this new evidence provides the smoking gun Qatar's opponents have been waiting for?

While the documents have raised serious questions about Bin Hammam's conduct and his support of the Qatar bid, there is no single email, bank transfer or letter which shows unequivocally that the campaign was directly involved in paying bribes via Bin Hammam.

And Qatar can legitimately argue that since Bin Hammam never held an official role for the bid, anything he may have done to win support for his country was absolutely independent of them.

Part of the problem for Fifa is that while the bid teams were bound by stringent bidding rules, the executive committee members representing bidding nations - such as Bin Hammam - were not subject to those rules.

Even if it is eventually proved that Bin Hammam used his money to secure support for Qatar they could continue to distance themselves from him and argue that they have broken absolutely none of Fifa's guidelines.

Among the other allegations published on Sunday were claims that Bin Hammam's old ally Jack Warner - an accomplice in his plot to buy up support in the Caribbean for his push for the presidency - received $1.6m, a quarter of it in the period leading up the World Cup vote. So far Warner has stayed silent on these claims.

And then there is a claim against Tahiti's former Fifa executive Reynald Temarii who, the paper says, was bankrolled by Bin Hammam to fight his suspension from the committee on the eve of the vote.

That, the paper claims, prevented another member from the Oceania region being co-opted on to the executive, thus denying Australia (and England) a probable vote in the election. As with Warner, Temarii has not yet commented.

This is all compelling and fascinating stuff, but what some observers want to see is clear, hard proof that executive committee members who backed Qatar in the vote received inducements in cash or other gifts to back their bid.

The point with the evidence we have seen so far is that even if African football chiefs could be persuaded to support Qatar - what real influence could they have had with the executive committee members who did have a vote?

Much will now depend on the actions of Garcia. He has been working for almost two years on an investigation into the many previous allegations of corruption in the bidding process.

This week he is due to meet Qatar World Cup officials, including Hassan Al Thawadi, the chief executive, in Oman. This meeting was planned long before the latest revelations but he is now certain to ask the paper for their documents.

But it's worth pointing out here just how limited Garcia's powers are.

He can't order a revote. And he can't even interview Bin Hammam about the latest claims because he has already been banned from football for life.

So no one should expect Garcia to take any swift or decisive action on this leak. In fact his final report is not expected until the autumn and is far more likely to focus on how Fifa can improve their World Cup bidding process in the future.

Many critics believe Garcia is no more than a fireguard for Fifa, allowing them to point all uncomfortable questions about the World Cup bidding contest his way while getting on with the more immediate problems of running this summer's World Cup in Brazil.

What may change the weather on this story is the sheer scale and weight of the Sunday Times evidence. They have a host of secret documents and may not yet know exactly what they have.

Like the Telegraph with MPs expenses, if the paper can produce a relentless stream of allegations which ask difficult questions of the bidding process and the conduct of senior Fifa executives, then it will be impossible for Fifa to hold the line - especially if their multi-million pound sponsors start to get nervous.