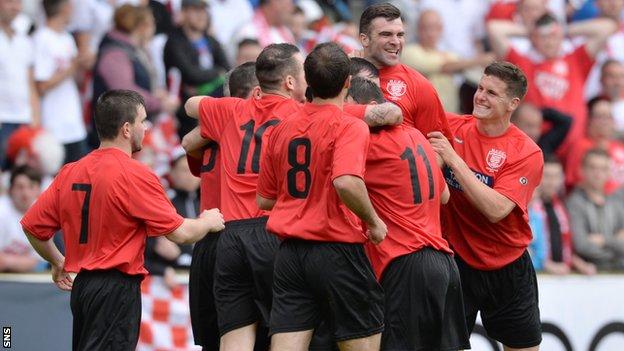 Glens defender McChesney was sent off after giving away the second spot-kick.

And Paul McKenzie nodded home the third for Darren Henderson's United side to wrap up the victory.

With Hurlford Thistle having recently won the Scottish Amateur Cup, the result at Kilmarnock's Rugby Park marked a memorable double for the village.

Glenafton started the game on the front foot but United hit the front from the penalty spot after their first foray up-field.

With just three minutes on the clock, Glens defender McChesney was judged to have brought down Robertson in the area and Keane scored from the spot, crashing the ball in off the left-hand post.

Glenafton could have levelled within a minute, but Alan Kinney failed to beat goalkeeper Ally Brown with a close-range header after being set up by Cameron Marlow's fine cross.

Kean was given another decent sight of goal midway through the half following a spot of pinball in the Glens box, but Brian McGarrity pulled off a superb point-blank save to deny him.

The goalkeeper's heroics only delayed the striker's celebrations, however, as United found themselves with a two-goal lead and a one-man advantage after 29 minutes.

McChesney's big day turned into one to forget when Robertson again broke clear and the Glens defender sent him sprawling in the box for the second time, earning himself an early bath.

Kean took the responsibility again and drilled the ball into the same corner to make it 2-0.

Glenafton had McGarrity to thank for keeping their faint hopes alive at the start of the second half when he made two excellent stops to deny Kean and Danny Mitchell.

Kean then passed up a great chance to net his hat-trick when his header from a couple of yards out bounced over the bar.

The play was flowing towards Glens' goal but they began to find their feet and produced and excellent passing move to set defender Craig McEwan in on goal, but he fired well wide.

Aaron Connolly drew a save from Brown in 73 minutes as Glenafton searched for a way back into the game, but with two team-mates standing unmarked on the six-yard line, his decision to go for goal sparked an angry reaction.

And after 81 minutes Hurlford added some gloss to the historic result when McKenzie nodded home from sub Stevie Masterton's corner.

Masterton hit the post with a free-kick from distance late in the game as United ended the match well on top.