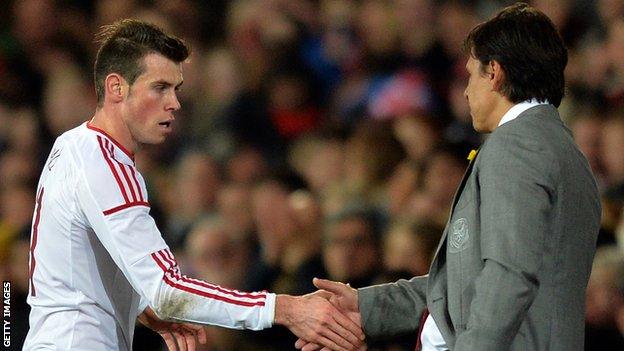 Manager Chris Coleman has insisted Gareth Bale's commitment to Wales is not in question despite him missing Wednesday's Netherlands friendly.

The Welsh FA said Bale pulled out of the squad after being "troubled with a leg muscle injury for a few weeks".

Forward Bale shrugged off an injury to score in Real Madrid's Champions League win, but Coleman understands the 24-year-old needs to recover.

"This game was maybe a bridge too far for him," he said.

"There was talk of Gareth before the game having a problem, a strain, and would he play or wouldn't he play.

"Thankfully he played and we can be proud of him. They won the Champions League which is the big prize."

'Baley', nine times out of 10, is with us so I don't see us having a problem. He may miss one or two but I don't think he's going to miss all our friendlies

"Had he been fit, he would have been with us."

Bale had been named in Coleman's original squad for the friendly against the World Cup-bound Dutch in Amsterdam.

But the Cardiff-born player withdrew from the squad with injury only days after his goal-scoring performance helped Real Madrid win the Champions League against Atletico Madrid.

Bale, who featured in Wales' last two friendly internationals, is currently on a personal promotional tour of Indonesia.

He feels the forward's withdrawal could be a sign of things to come - a reminder of his own issues in securing Ryan Giggs' release from Manchester United for friendly matches.

But Coleman does not see Bale being a bit-part player for Wales and Real calling the shots when it comes to his international game time.

"We've never had a problem with Gareth or Madrid. They've always let him come with us.

"He may miss one or two, but I don't think he's going to miss all our friendlies."

Bale would have been a candidate to captain Wales against Netherlands in Amsterdam had he not pulled out of the squad.

In the absence of Bale, regular skipper Ashley Williams and FA Cup winner Aaron Ramsey, Liverpool midfielder Joe Allen will captain the side.