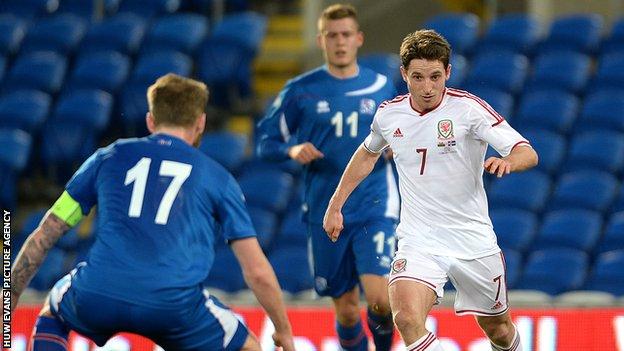 Liverpool midfielder Joe Allen will captain Wales in their friendly against Netherlands in Amsterdam on Wednesday.

The 24-year-old will skipper the side in the absence of Swansea central defender Ashley Williams, who has been rested because of injury.

Real Madrid forward Gareth Bale and Arsenal midfielder Aaron Ramsey, both of whom would have been considered for the captaincy, are also absent.

"I had no qualms about asking Joe," said manager Chris Coleman.

Allen, who joined Liverpool from Swansea for £15m during the summer of 2012, has won 16 caps for Wales since making his debut against Estonia in May 2009.

He made 24 Premier League appearances and scored once in Liverpool's unsuccessful title bid and Coleman believes the Carmarthen-born player has come of age at club and international level.

"I've watched Joe closely for a long, long time before he got into the Swansea City first team and remember him as a kid coming through," Coleman added.

We've got to stamp our authority on this game and let them know, as good as they are, we're not there to make numbers up regardless of who's missing

"He's gone on and established himself at one of the biggest clubs in the Premier League.

"In the second half of the season he was really, really outstanding. It's something [captaincy] that I never thought twice about.

"I think the way we play Joe is at the heart of that. He's a very brave player, one of the bravest players I've experienced working with in terms of he always wants the ball.

"It doesn't matter whether he's having a good time or a bad time he just keeps going to get the ball and he leads within his play.

"International football, the way he plays, is for Joe. There's no opposition that we could play that I think Joe would struggle to make an impact on the game."

Real Madrid's Champions League winner Bale and FA Cup winner Ramsey of Arsenal are among the players who will miss the game against Louis van Gaal's World Cup-bound side.

Swansea's defensive duo Williams and Ben Davies have not been included due to injury while midfielder Jack Collison, recently released by West Ham, also pulled out of the squad.

The game at the Amsterdam Arena will be Wales' final friendly ahead of the opening Euro 2016 qualifier against Andorra in September and Coleman is relishing the test against the side ranked 15th in the world.

"We've got to stamp our authority on this game and let them know, as good as they are, we're not there to make numbers up regardless of who's missing," Coleman said.

"It doesn't get any harder than Holland away and it's a good experience for us and that's how you learn.

"When we get a chance to play a friendly what's the point of us playing a friendly against a lower team where we know we're going to win nine times out of ten?

"That looks fine and we've won another game but you learn more when you play against the best teams."