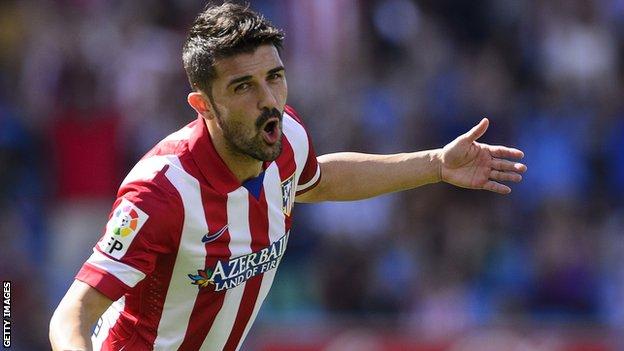 The 32-year-old striker, who is part of Spain's 23-man World Cup squad, said he has received an offer to join an unnamed club that he "can't refuse".

He has been linked with a switch to New York City FC, the Major League Soccer franchise owned by Premier League champions Manchester City.

"It is an irresistible project for me and my family," he said.

"It is very, very good. It is about football and I have to accept it."

Villa scored 13 league goals as Atletico pipped Barcelona and Real Madrid to become Spanish champions for the first time since 1996.

He was also part of the side which was beaten in the Champions League final by neighbours Real last weekend.

"It has been a great project for me both personally as well as sporting and now I face a new challenge which is what I have always looked to do in my career and my life," he told the Atletico website.

"I would like to thank the people at Atletico and those that tried to convince me to stay, like coach Diego Simeone and the rest of the coaching staff."

Villa joined Los Rojiblancos on a free transfer from Barca, where he spent three seasons after signing from Valencia for £34m in 2010.

But he missed Euro 2012, where Spain successfully defended their title, with a broken leg.