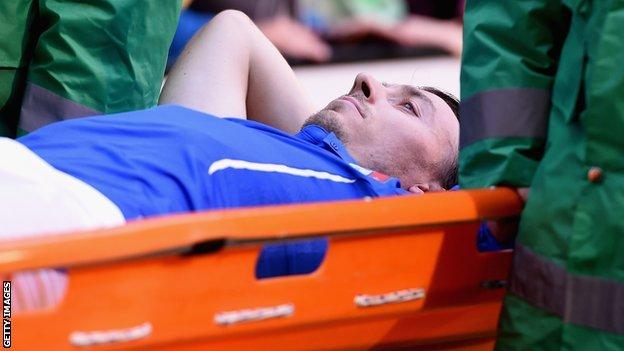 Italy midfielder Riccardo Montolivo will miss the World Cup after breaking his left leg during the 0-0 draw with Republic of Ireland at Craven Cottage.

The AC Milan player, 29, was carried off on a stretcher after a challenge from Reading defender Alex Pearce.

Italy team doctor Enrico Castellacci said: "I haven't seen the X-ray yet to evaluate the extent of it, but for a broken bone you can expect surgery."

Montolivo, winning his 58th cap, lasted just eight minutes of Italy's penultimate warm-up game, and was immediately taken to a London hospital for X-rays, which confirmed the damage.

He was replaced by former Liverpool midfielder Alberto Aquilani, who went off at half-time complaining of dizziness.

Aquilani's Fiorentina team-mate Giuseppe Rossi may have secured his place in Italy's 23-man squad for Brazil, though, by playing for 70 minutes on his return from knee trouble.