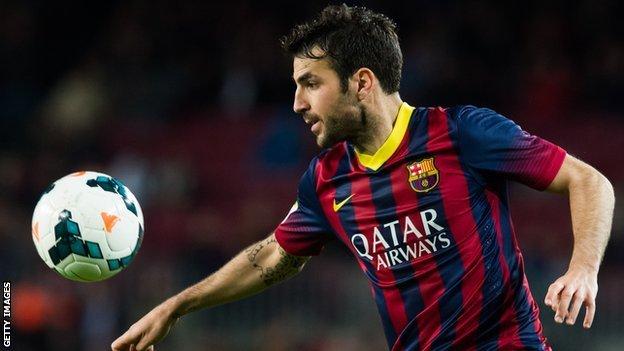 Barcelona are prepared to let Cesc Fabregas leave this summer for £30m - and the midfielder would prefer a Premier League return.

The Catalan giants have made potential suitors aware about the 27-year-old Spain international's availability.

He rejoined Barcelona in 2011 from Arsenal for £35m, who have a buy-back option on their former captain.

Arsenal are yet to express any interest in bringing their former captain to Emirates Stadium again.

He moved back to Barca on a five-year contract - which still has two years to run - and has registered 35 goals in 129 appearances, while accounting for the most assists in La Liga over the past two seasons. He has won La Liga and the Copa del Rey at the club.

Fabregas was the subject of two unsuccessful bids from Manchester United last summer, but told BBC Sport in February he was "flattered" by their interest.

He is part of the Spain squad set to begin their defence of the World Cup against the Netherlands on 13 June.