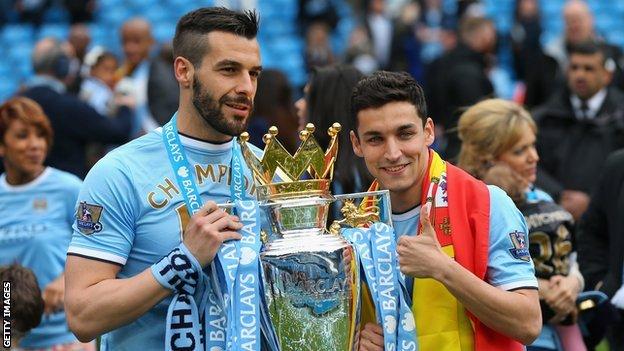 Manchester City pair Alvaro Negredo and Jesus Navas have been left out of Spain's 23-man World Cup squad, but Chelsea's Fernando Torres has been selected by manager Vicente Del Bosque.

Torres is one of six Premier League players in the squad, which includes Atletico Madrid striker Diego Costa.

After opening with a repeat of the 2010 final against the Dutch, world and double European champions Spain continue the defence of their crown against Chile and Australia in Group B.

Costa has been struggling with a hamstring injury suffered when Atletico won the league title at Barcelona, but has been given the chance to represent Spain in his native Brazil.

The 25-year-old was been born and raised in the South American country and made two friendly appearances for them last year before becoming a naturalised Spaniard.

Torres is also included despite making only 16 Premier League starts and scoring five goals this season.

The 30-year-old marked his return to the Spain line-up after an 11-month absence by scoring a penalty as Spain defeated Bolivia 2-0 in a friendly match in Seville on Friday.

Torres will be joined in Brazil by team-mate Cesar Azpilicueta, Arsenal's Santi Cazorla, Manchester United's Juan Mata and David De Gea, while City will be represented by midfielder David Silva.