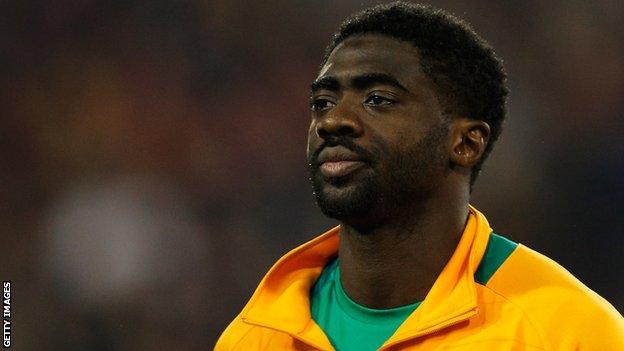 Ivory Coast defender Kolo Toure has contracted malaria and missed the 2-1 defeat by Bosnia-Hercegovina in a World Cup warm-up on Saturday.

Toure, 33, was taken ill on a flight to the United States on Wednesday, but is expected to be fit for the finals.

"He did not participate in the match against Bosnia but will return early next week," said professor Cyrille Dah, head of the team's medical staff.

Yaya Toure also missed the friendly in St Louis with a muscle problem.

Kolo contracted the illness in the Ivorian city of Abidjan before meeting up with his national squad at their training camp in Dallas.

Dah added that the Liverpool defender had undergone treatment which ended on Friday.

His brother, 31-year-old Manchester City midfielder Yaya, has been undergoing treatment in Doha and is expected to join the Elephants' squad in America on Saturday.

The pair's absence was felt by the Elephants, who fell to a double strike by Edin Dzeko.

The Manchester City striker scored once in each half to give Bosnia a 2-0 lead before Didier Drogba scored a late consolation goal for Ivory Coast.

Dzeko, Bosnia's all-time leading international scorer, gave them the lead after just 17 minutes when he rifled a shot into the back of the net from just inside the box.

He scored again in the 53rd minute, controlling Miralem Pjanic's cross with his first touch and volleying the ball into the net with his second.

Ivory Coast created some good opportunities and were finally rewarded with a goal in the last minute when Drogba, playing in his 100th international, was brought down by Anel Hadzic.

Already his country's most prolific scorer, Drogba chalked up his 64th international goal when he scored from a free-kick.

Both teams will participate at the tournament in Brazil.

Bosnia play Mexico in a friendly in Chicago on Tuesday before flying to Brazil to finish off their preparations for the World Cup, where they are drawn in Group F with Argentina, Iran and Nigeria.

Ivory Coast's next warm-up match is against El Salvador in Dallas next Wednesday. The Africans are in Group C, along with Colombia, Greece and Japan.