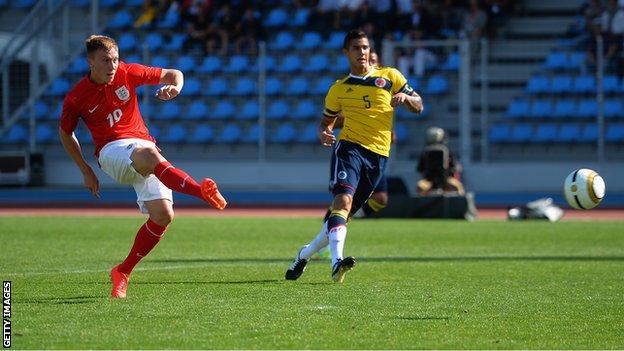 England Under-20s secured a third-place play-off against Portugal at the Toulon Tournament after drawing 1-1 with Colombia.

Cauley Woodrow fired Gareth Southgate's side ahead before Joao Rodriguez equalised after the interval.

But England, who started their fourth and final Group B game in third spot, advanced after Brazil beat Qatar 7-0 later on Friday.

Southgate made eight changes to protect his young players from burnout.

Fulham striker Woodrow was one of three survivors that started Wednesday's 1-1 draw with South Korea.

The 19-year-old found the net in the 16th minute from 15 yards, his second goal of the tournament.

But England were denied victory when Rodriguez levelled in the 68th minute after firing beyond Jack Butland.

England could only have been denied Sunday's play-off with group A runners-up Portugal had Qatar beaten Brazil 6-0.

Brazil are already assured of a place in Sunday's final against France.