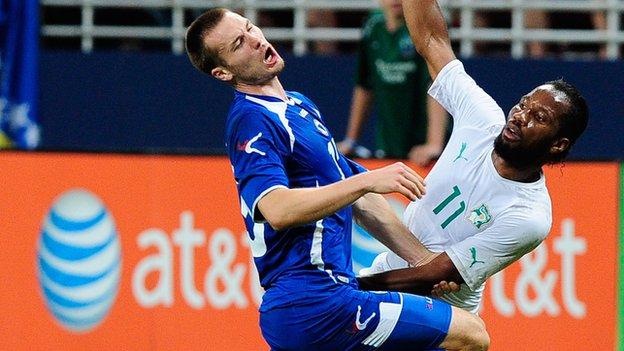 Ivory Coast boss Sabri Lamouchi said his side were poor in a 2-1 defeat by Bosnia in Saturday's World Cup warm-up match played in the United States.

Edin Dzeko scored twice for Bosnia, while Didier Drogba scored with a free-kick on his 100th international.

"It was logical that we lost because we made a lot more mistakes than our opponents," Lamouchi said.

"You cannot win playing like we did. There were too many poor decisions in the first half."

Lamouchi named a largely experimental line-up, handing debuts to goalkeeper Sylvain Gbohouo and midfielder Ismael Diomande, and leaving out many of his expected first choice players.

"We had a slight improvement in the second half but we were not able to really trouble our opponent," he added.

"But there are positives to take out of the game, like being able to give paying time to players who don't usually get a chance."

The Ivorians play El Salvador on Wednesday in Dallas, where they have been preparing over the last week for the tournament in Brazil.

"The next friendly will be a chance to see better the side we reckon will start our first game against Japan," Lamouchi said.