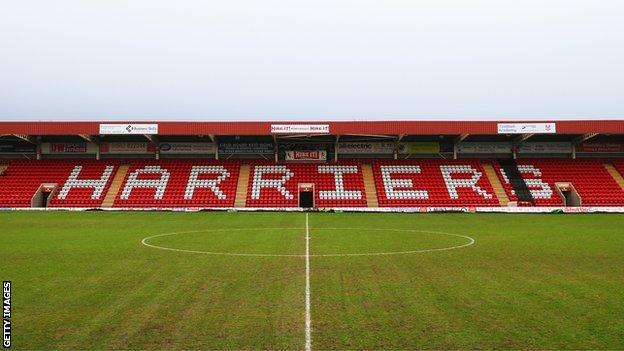 Obeng, 22, has been with the Pics since 2010 and scored 17 goals in all competitions in 2013-14 as Rushall finished five points outside the play-off places.

We've addressed that and, with a little bit of luck, goals won't be a problem..

Obeng has joined on a one-year deal, with the clubs discussing compensation.

Obeng, who was born in Ghana, can play on either flank and is set to help boost Harriers' attacking potency as they embark on another tilt at promotion from the Conference Premier next season.

Boss Gary Whild has already added strikers Reece Styche and Craig Reid in the close season and says his side must sharpen their cutting edge if they are to improve on this season - when they finished five points outside the play-offs after a run of six draws in their last 10 matches of the campaign.

"Being hyper-critical, in the 13 games I had at the end of the season, the draws cost us," boss Gary Whild told BBC Hereford and Worcester.

"If we could've nicked couple of wins or a goal to get us a win, that would've made a big difference for getting in the play-offs.

"We've addressed that and, with a little bit of luck, goals won't be a problem."