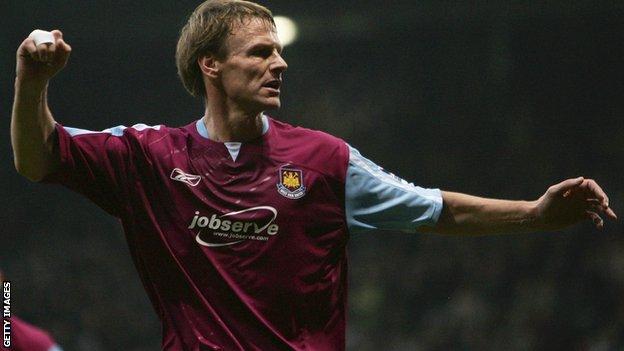 Sheringham, who spent three seasons at Upton Park between 2004-07, joins Sam Allardyce's back-room staff with the aim of improving the club's goal tally.

Sheringham, 48, said of the job offer: "It was far too good to resist really."

He added: "Being a West Ham boy and coming from the area, it fits nicely in all that I'm about, what with working alongside Sam and knowing a few of the players as well."

West Ham finished 13th last season and Allardyce has been asked by the board to deliver a more attacking style of play.

As a player, he won the Champions League, three Premier League titles and an FA Cup with Manchester United following a transfer from Tottenham in 1997.

Upon joining the Hammers in 2004 - via a second spell at Spurs and a season at Portsmouth - he helped the club earn promotion to the Premier League and played in the FA Cup final defeat against Liverpool the following year.

He also excelled for England, earning 51 caps and scoring 11 goals and playing at two World Cups and the European Championship finals in 1996.

Sheringham played alongside Allardyce at Millwall as a youngster and has known the Hammers manager for more than 30 years.

He is currently completing his coaching qualifications.