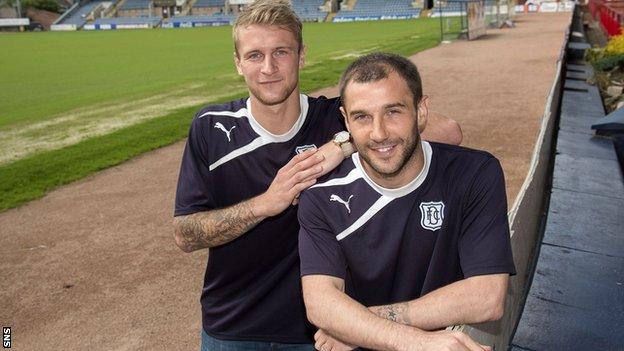 Defender McPake and midfielder Thomson, both 29, were released by Hibs after their relegation to the Championship.

The duo have signed two-year deals at Dens Park while 22-year-old Bain has signed up on a three-year contract.

Dundee manager Paul Hartley and Bain worked together when both were at Recreation Park.

Dundee return to the top flight after a year in the second tier, Hartley guiding the club to the Championship title after joining in February.

McPake was Hibs captain under previous manager Pat Fenlon but was injured when Terry Butcher took charge of the Edinburgh side in November.

Although he did return to fitness late in the season, McPake was only an unused substitute under Butcher.

"The club [Dundee] saw my fitness isn't a problem and it's been good to get it all finally sorted," Northern Ireland cap McPake told the Dundee website.

"I knew at the time Kevin was coming as well which shows the ambition as well for the club getting players of his calibre in.

Injuries also restricted his appearances under Butcher, though he did play as a substitute and miss a penalty in the shoot-out of the play-off against Hamilton Academical which resulted in Hibs' demotion.

Bain, formerly of Aberdeen, was signed by Hartley at Alloa in 2011 and helped the Wasps gain successive promotions.

The title race with Hamilton and Falkirk went to the last day of the season and Dundee became champions and gained automatic promotion by beating Dumbarton.