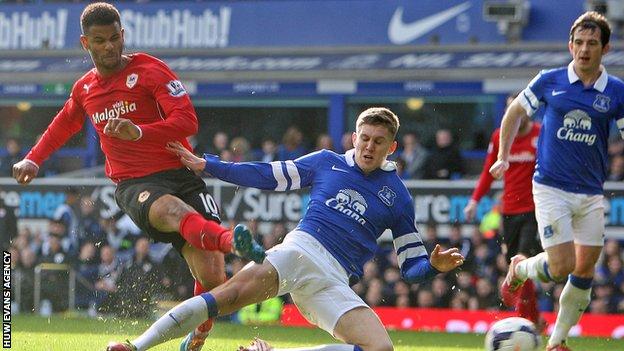 Campbell, 26, has a release clause in his contract that would be triggered by a bid believed to be worth £800,000.

"It's not in my court any more, it'll be up to Fraizer to decide what to do," Solskjaer told BBC Wales Sport.

"If he gets offers he might be wanting to stay in the Premier League. But of course I've spoken to him and he knows how much I want him to stay."

Campbell was Cardiff's top scorer this season with nine goals, and the Bluebirds are trying to persuade him to stay following their relegation from the Premier League.

The former Manchester United striker signed from Sunderland in January 2013 for £650,000 and scored seven goals in 12 matches to help the club return to the English top-flight for the first time in 51 years.

Solskjaer wants Campbell to spearhead Cardiff's challenge to bounce straight back to the top flight but knows the striker can force a transfer if a club meets the asking price.

Captain Steven Caulker and midfielder Gary Medal are believed to be two others to have similar release clauses in their contracts.

Solskjaer refused to disclose whether any clubs had made bids for either player.

"Not too much has happened that's concrete," said Solskjaer.

"We are still under contract with them. We do expect probably something to happen with some of them, maybe not all of them. There has been interest shown in our players.

"They've played really well last season, they are talented players and you expect clubs to enquire and ask."

Goalkeeper David Marshall is another to attract interest after a string of impressive performances.

"David signed a new contract in February," added Solskjaer, whose family will move over to join him in Cardiff from Norway in August.

"I can't comment if players have clauses because that's confidential, and not all of them do.

"So I'm working hard to keep the ones I can stop leaving. The ones who've got clauses, I'm pretty tied down really."

Solskjaer has already signed four players since their relegation from the Premier League was confirmed.

Forwards Joe Mason and Nicky Maynard will also return after spending time away on loan.

Solskjaer, who wants his squad to feel the pressure of being expected to succeed, says he hopes to sign more players but is also willing to sell and send players out on loan to suit his needs.

"We didn't have the quality, the nous, the knowhow in crucial games where we maybe should've scored the first goal," he said.

"Then we got into situations where we had to chase games and didn't manage to turn them around, apart from the Norwich one.

"Now I feel with the signings we've got, with Guido, Javi, Adam and Kiko [Macheda] - they are players who can take them one or two chances. Then we'll score goals and we'll be in a different situation."