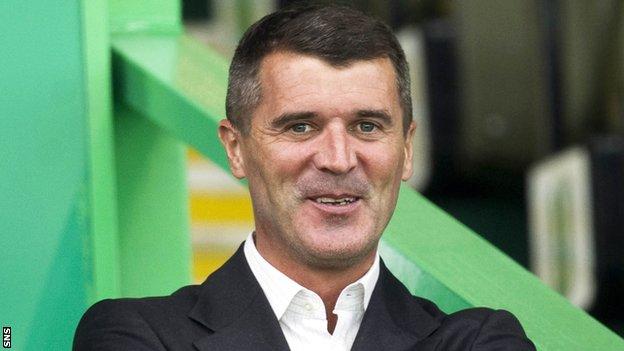 Former Republic of Ireland midfielder Roy Keane would be a "good man" to succeed Neil Lennon at Celtic, according to defender Charlie Mulgrew.

Keane, now number two to Martin O'Neill with the Irish national side, is among a host of names linked with the Scottish Premiership club's vacancy.

"I'm sure he'd be a good man for the job," Celtic's Mulgrew said.

As a player, I think the club needs a big character and he definitely fits the bill

"As a player, I think the club needs a big character and he definitely fits the bill."

Since ending his playing career at Celtic after a short spell at the club in 2006, former Manchester United midfielder Keane has had management experience with Sunderland and Ipswich Town.

Lennon left Celtic after winning his third straight league title and Keane, 42, is among those linked with succeeding him at Celtic Park.

Mulgrew said it was important Celtic made the right appointment ahead of the upcoming European qualifiers when the club will seek to secure Champions League football.

"He's a strong character and probably the type of guy that would be good for the job," he said.

"Of course, we want a manager as soon as possible because it gets us prepared for the Champions League qualifiers.

"But I'm sure the club will take its time to get the right man.

"As long as it's a big character. I'm sure the club will look into it and find the right man for the job."