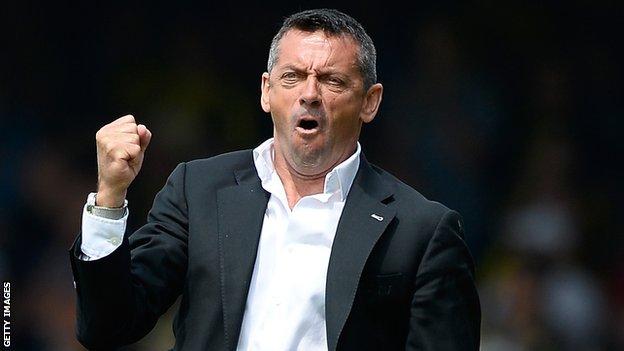 Southend United boss Phil Brown is hopeful of signing a contract extension to keep him at Roots Hall beyond 2015.

Brown led the Shrimpers to a League Two play-off semi-final in his first full season in charge.

"When the chairman and chief executive broached the subject about extending my contract I was delighted," Brown told BBC Essex.

"Hopefully in the next couple of weeks we can put pen to paper and get on with strengthening the squad.

Former Hull City and Preston boss Brown took over at Southend in March 2013, signing a deal until 2015, and went on to lose the Johnstone's Paint Trophy final to Crewe.

His summer transfer activity was restricted by a transfer embargo which limited the squad number to 20.

The club was finally able to trade freely in late January and Brown led them to a fifth-place finish, but they were beaten 3-2 on aggregate by Burton in the play-offs.

"We've ploughed all our energies into what we wanted to achieve and just missed out," he said.

"What the chairman recognises is what's going on in the background and that is steady progress.

"Obviously we want that steady progress to manifest itself in automatic promotion next year.

"It was a difficult year. I think the chairman did everything he possibly could to support me. At times his hands were tied by transfer embargos.

"When the embargos were lifted we showed what we could do in the transfer market. Hopefully with a clean slate we can achieve promotion."