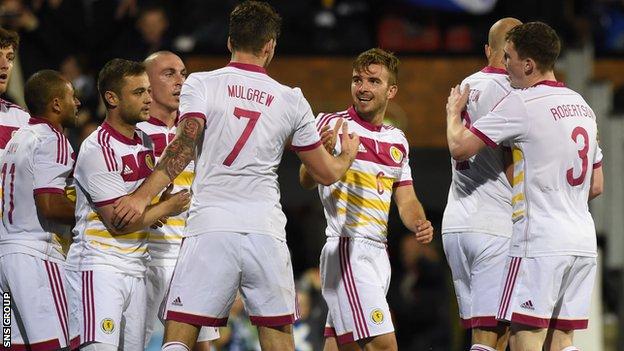 Manager Gordon Strachan admitted rustiness caught up with Scotland as Nigeria found a late leveller in the 2-2 draw at Craven Cottage on Wednesday.

"Some of our guys have not played since 4 May," Strachan told BBC Radio Scotland after a game in which the Scots led twice.

"We didn't execute when normally we would and I think we were one pass away from another four goals.

"But I'm really pleased to finish the season off threatening the goal."

Charlie Mulgrew cleverly diverted James Morrison's strike into the net to give Scotland a 10th-minute lead before Michael Uchebo levelled with a deflected shot just before the interval.

Azubuike Egwuekwe then turned a dangerous Alan Hutton cross into his own goal early in the second half.

World Cup-bound Nigeria finished strongly and Uche Nwofor went close with two headers before a defensive lapse allowed him to drill in a shot in the final minute of regulation time.

Grant Hanley dithered in possession in his own box before his attempted clearance rebounded into the path of the Super Eagles substitute.

"There was nothing we could do about the first goal," said Strachan. "The second; you're hoping we can clear that better but it's not happened. But I thought Grant Hanley was immense.

"You might say I was a bit disappointed. Not for me; it's for the players.

"We've had three days' hard work when they could have just come along and gone through the paces but they've worked really hard."

Scotland, who had kept four successive clean sheets prior to the game, were a threat on the counter-attack, with full-backs Hutton and Andrew Robertson eager to get forward and Ikechi Anya busy on the left flank.

"We've been building up, trying one or two things and I saw that coming tonight," added Strachan. "I saw more threat at goal."

Chris Martin made his debut as a half-time replacement for Steven Naismith, with the Derby striker having a shot well saved by goalkeeper Austin Ejide.

And the 25-year-old was praised for his contribution as Scotland stretched their unbeaten run to six matches.

"When you look at modern strikers it's not just about how many goals they score, it's what you can do for the players round about you," explained Strachan.

"I think you saw the midfield players were thinking 'what a good player to play with, I'm going to get myself up there'.

"And it gives them that belief for players to make runs from the middle of the pitch. He's got a wonderful touch for a big fellow and he was a real handful.

"Players know if the ball is going towards him that there's a good chance you're going to link up with him.

"So, that was a bonus. That has added to our squad."