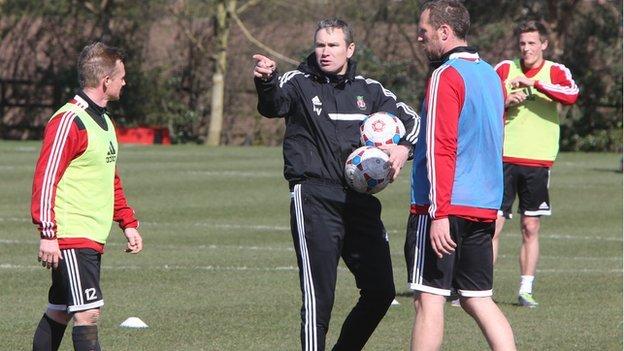 Wrexham manager Kevin Wilkin has made his first signing since taking over at the Racecourse by picking up defender Blaine Hudson on a free transfer.

Hudson was released by Cambridge United on Tuesday and Wilkin wasted no time in persuading the 6ft 6in centre back to join Wrexham.

The 22-year-old joined Welling on a season-long loan last July and made 38 appearances for the Conference club.

Wilkin has promised a number of changes after a disappointing season.

The Welsh club were 17th in the Conference Premier - their lowest finish since being relegated in 2008.

Wilkin, 46, took over as manager in March after Andy Morrell stepped down, and has set about putting a squad together he believes will challenge for promotion next season.

Hudson made his Cambridge debut in 2010 after leaving Norwich City as a 16-year-old, but was surplus to requirements this season at the Abbey Stadium.

He was one of six players not to be offered new contracts this week by the U's, who secured promotion to League Two through the Conference play-offs.