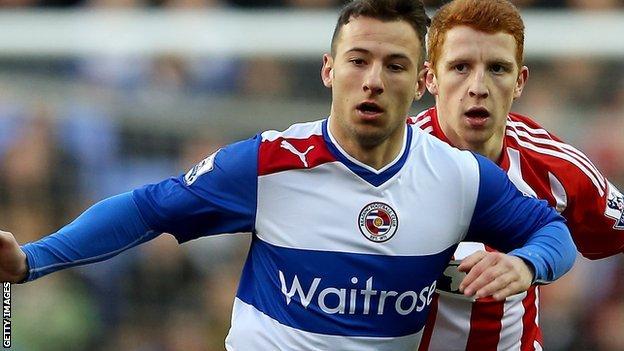 Cardiff have landed themselves a bargain in signing Reading striker Adam Le Fondre, according to ex-Wales and Royals defender Adrian Williams.

The Bluebirds have bought 27-year-old Le Fondre for an undisclosed fee, believed to be about £2m, from their Championship rivals.

"He's proven at every level, including the Premier League," said Williams.

"He is a fox in the box. Very similar I would imagine to his boss and his boyhood hero Ole Gunnar Solskjaer."

Le Fondre scored 15 league goals this season and had a year remaining on his contract at the Madejski Stadium.

Williams, who won 13 caps for Wales between 1994 and 2003, says the fee involved for Le Fondre would indicate Reading's urgent need for cash.

"For a proven striker in the Championship, if you're talking a million pounds or so, in modern day football, that is peanuts," said Williams.

Le Fondre started his career with local club Stockport County in 2004, before moving on to Rochdale in 2007 and then Rotherham two years later.

A move to Reading followed in 2011, where he scored 12 goals to help the club to Premier League promotion.

He then found the net 12 times in 34 top-flight appearances as Reading were relegated after winning just six games.