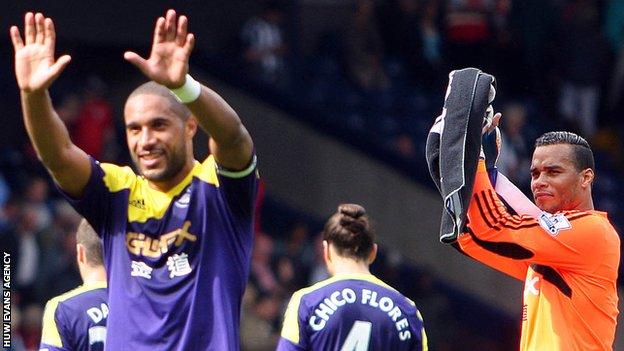 Swansea City say they have received no bids or enquiries for captain Ashley Williams or goalkeeper Michel Vorm.

Arsenal are reportedly among Premier League clubs showing an interest in defender Williams, while Liverpool are being linked with goalkeeper Vorm.

The Gunners and Liverpool were linked with 29-year-old Williams last season but Swansea held on to their man.

But doubts have risen over his Liberty Stadium future with no sign an extended contract being signed.

He revealed towards the end of last season he had yet to speak to Jenkins about a new deal, but expected to do so "at some point".

There has been no indication whether those talks have taken place. The player's agent has been quoted as saying Williams wants to stay at Swansea, but added this was the "the most important contract of Ash's career".

With only a year to run on his current contract, interested clubs would be hoping to prize the Wales captain away for a fraction of the reported £10m price tag Swansea were holding out for a year ago.

Swansea, though, insist they have not received an approach from any rival Premier League clubs.

Swansea have always maintained they are willing to sell any player for the right price and reason, although new manager Garry Monk wants Williams to remain as the lynchpin of the side.

The centre-back had another typically consistent season for the Swans this season, eventually leading the club to safety after a difficult period following the dismissal of manager Michael Laudrup.

Williams, who has 48 international caps, will miss Wales' friendly with Netherlands on Wednesday because of a foot injury.

Vorm should be involved in that game in Amsterdam, and the 30-year-old has emerged as a possible target for Liverpool. Reds manager Brendan Rodgers brought Vorm to Swansea for £1.5m from FC Utrecht when in charge at the Liberty Stadium in 2011.