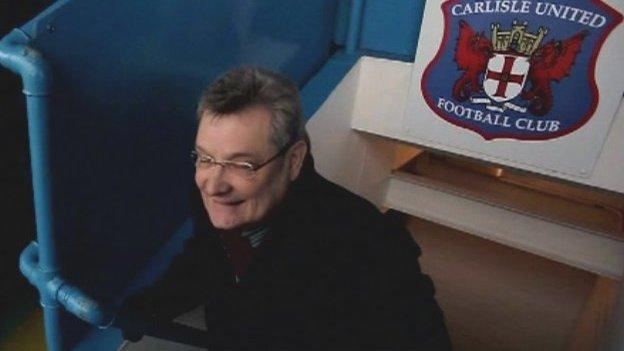 Carlisle United's discussions regarding the building of a new stadium in the city remain "positive" according to managing director John Nixon.

Plans were unveiled in November 2011 to leave Brunton Park, and despite relegation to League Two, the Cumbrians are continuing with the proposal.

"I would just say the discussions are moving in a positive direction," Nixon told BBC Radio Cumbria.

"These things take time but I'm confident myself and have to be."

Relegation to the bottom division of the Football League pyramid in May ended an eight year stay in the third tier.

During that time the Cumbrians made two trips to Wembley in the Johnstone's Paint Trophy and were also involved in the League One play-offs in 2008.

However the departure of Greg Abbott came after just two points were accrued from the opening six games, and the subsequent appointment of Graham Kavanagh was unable to bring stability.

In addition the recruitment of players took the club over budget last term.

Nixon has been quoted as backing Kavanagh for the club's promotion bid in 2014-15, while the club have also released 11 players in their preparations for the forthcoming campaign.

"It's easy in any company, organisation or institution to blame someone and I understand that," Nixon added.

"Fans need to blame someone and usually the first blame is the manager, then the board. We need to discuss what didn't work, what did work where we had problems, why we had injury problems, the training regime and how we do the training.

"Next season we're going in with a different regime with a full-time fitness coach so we can bring up the strength of the players.

"We've identified that through discussion and analysis."