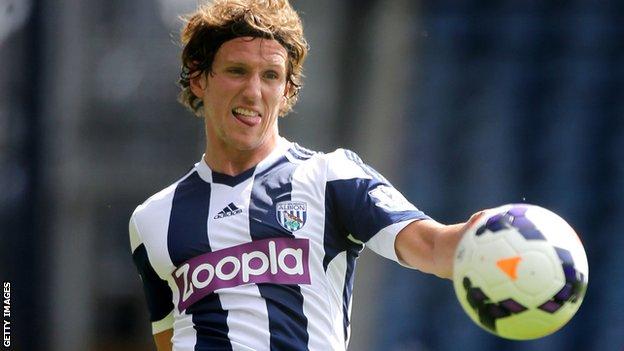 Sunderland have sealed the signing of West Brom defender Billy Jones on a free transfer after he rejected a new deal at the Hawthorns.

The 27-year-old has agreed a four-year deal, and will officially join the Black Cats on 1 July.

We're obviously disappointed by Billy's decision but wish him well

"I'm really happy to be here and I'm looking forward to getting back for pre-season and kicking on," said Jones.

"I've played at the Stadium of Light a number of times so I know what great backing the club has."

He added: "I knew I was signing for a massive club with everything in place to kick on up the league and carry on moving forward."

Jones joined West Brom from Preston in 2011, going on to make 74 appearances for the club, having begun his career at Crewe Alexandra.

West Brom said they had been in contract negotiations with Jones since October 2013 and were "disappointed" by the full-back's decision to reject what they described as "vastly-improved terms".

"Billy rejected this and has exercised his right to run down his contract with a view to joining Sunderland," said West Brom director of football administration Richard Garlick.

"We're obviously disappointed by Billy's decision but wish him well in his future career.

"With there being no guarantees that Billy would re-sign, we have been preparing for this scenario and will pursue the options we have been exploring in the right-back position."