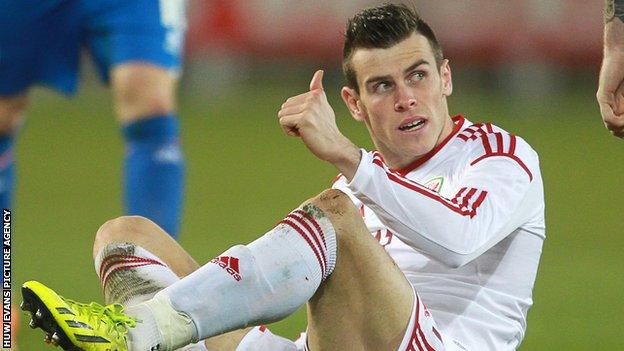 The Football Association of Wales says 24-year-old Bale has pulled out of Wales' friendly against Netherlands on 4 June, after being "troubled with a leg muscle injury for a few weeks".

Yorath feels the forward's withdrawal could be a sign of things to come.

"It's a situation [boss] Chris Coleman has got to get used to," he said.

"I had the same thing with Ryan Giggs getting pulled out of international friendlies a hell of a lot of times.

"I came to the conclusion with Ryan [Giggs] that as long as I had him for European Championships and World Cup games then I could live with that and I think Chris is going to have to face the same situation."

Yorath, who managed Wales between 1988 and 1993, believes players are not always to blame for pulling out of international fixtures.

"I think it's the managers not the players," he said. "I think they put pressure on them not to play.

"I had the same thing when I played for Leeds United. We had 14 internationals playing for us and Don Revie would ask us not to go, but we all went because we wanted to play for our countries."

The Welshman joined Real from Tottenham for a record £85.3m last summer and made 17 assists, scoring 22 goals this season, including the winner in the Copa del Rey win over Barcelona.

Yorath has been impressed with the start he has made at the Spanish giants and hopes he is able to play for Wales regularly.

"He's had a fantastic first season over there," said Yorath.

"I can't remember another British footballer going abroad having such a good season.

"He's a fantastic footballer and he could possibly play anywhere you put him on the football pitch.

"He's playing exceptionally well and I just hope he makes himself available for every international."