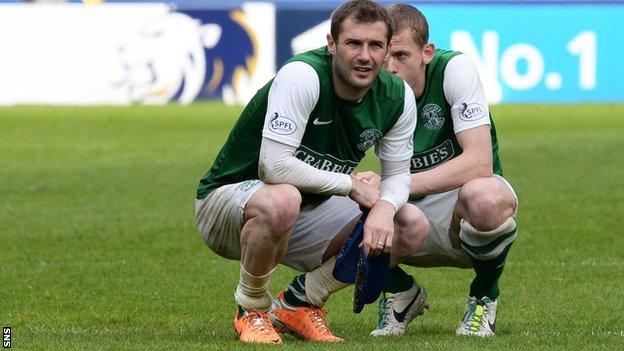 Scott Brown believes Kevin Thomson's lack of game time was a key factor in Hibernian being relegated from the Scottish Premiership.

The Celtic skipper came through the youth ranks at Easter Road alongside fellow midfielder Thomson.

And Brown reckons the 29-year-old's absence was key to Hibs' plight.

"The biggest thing is Thomson's not been playing for the last four or five months, and they dropped rapidly down the league," said Brown.

Thomson, who struggled with injuries during spells of the campaign, was an unused substitute as Hibs beat Hamilton Academical 2-0 in the Premiership play-off first leg.

He's a diehard Hibs fan and I spoke to him the other day, he's devastated that his club has gone down

He was brought on in the second leg at Easter Road, which Hibs lost 2-0, and missed a spot-kick in the penalty shoot-out that sealed the club's fate.

Thomson, who left Easter Road in 2007 for Rangers, has not been offered a new deal by the Leith side.

"He is a diehard Hibs fan and I spoke to him the other day, he's devastated that his club has gone down," added 28-year-old Brown, who also left Hibs in 2007 to make the switch to Celtic.

"And I think it's even worse that he's not signing again to try to help them get promoted."

Brown described Hibs' relegation was a "sad day" but, despite the fact Hearts will also be in the second tier after suffering relegation, he believes the Premiership will still offer plenty of excitement.

"It's going to be a hard league no matter what, Motherwell and Aberdeen have been doing really well so they're going to push on, St Johnstone and Dundee United as well," Brown added.

"Hamilton have come up and they're a good team, they play good football, so it'll be a good experience for them."