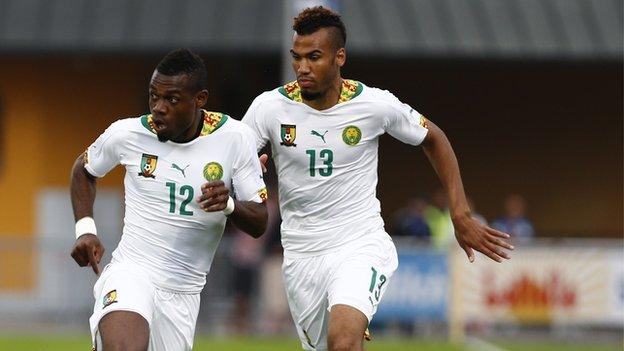 Cameroon's Football Federation and the country's government have agreed to pay FCFA 50m (US$104,000) to each player in the final 23-man World Cup squad.

It is, however, a raise of FCFA 5m from the amount paid at the previous World Cup in south Africa in 2010.

The players had wanted to ensure money coming in was being fairly divided.

Captain Samuel Eto'o believes the players are entitled to know how the money being earned by their performances and progress in the competition is being utilised.

In an interview with Mboafootball.com, Eto'o said: "What is the quota for players who work for this money that goes into the coffers of the Cameroon Football Federation (Fecafoot)? This is the question.

"We hope the government will help us get our due and clarify the situation."

The problem of fees resurfaced during the Indomitable Lions' training camp in Austria, where they are preparing for their World Cup matches against Mexico, Croatia and hosts Brazil in Group A.

Rumours started that the players were demanding up to FCFA 150m from the authorities.

Cameroon coach Volker Finke has distanced himself from the situation because he feels it is an issue for the authorities and the players.

"I concentrate on football, fees are between the players and the authorities, I am not concerned by this issue," he said.

"I am hopeful it will not affect the harmony in the group and the training ahead."

It is not the first time a row over payments has erupted. The most recent recent episode came in 2011 when players went on strike during the LG Cup over an FCFA 500,000 they said they were owed.