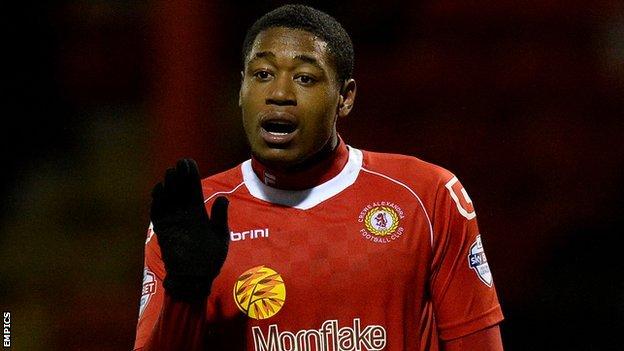 The 20-year-old striker finished this term as top scorer at the Alex, after spending a second successive season-long loan at Gresty Road.

And Baker has told BBC Radio Stoke that if would be a real coup if they could sign him on a more permanent basis.

Former Crewe midfielder James Bailey, 25, who left Gresty Road for Derby County four summers ago, has also been lined up as a potential candidate to return.

But Aneke is the main concern, as he waits to determine whether he gets offered a new deal by his parent club Arsenal.

He has further enhanced his reputation with the Alex, his 16 goals this season having proved the difference between going down from League One and staying up - by just four points.

"Some of our loan signings did well for us last season and played their part in keeping us in the league, but Chuks did arguably more than anyone with the goals he scored," added Baker.

"He wasn't always pleasing on the eye but he gave us real power and strength.

"We have helped him as well. We have found him his ideal position and I know he enjoyed it here but he may be beyond us."