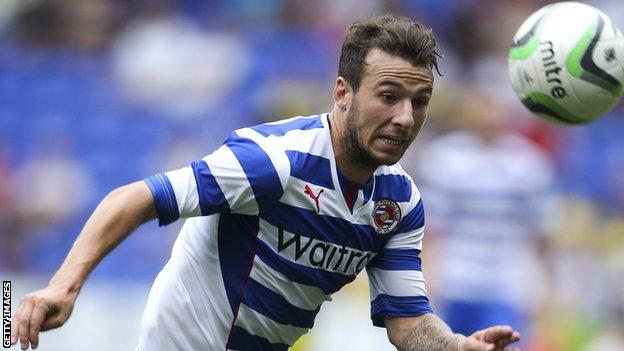 Cardiff City have completed the signing of striker Adam Le Fondre from Reading for an undisclosed fee.

Le Fondre, 27, scored 15 Championship goals this season and had a year left on his contract with the Royals.

"It's such a great opportunity for me to come here to Cardiff City and play for a boyhood hero of mine in Ole Gunnar Solskjaer," said Le Fondre.

"It was a move I just couldn't say no to. I'm delighted to be working with Ole and I can't wait to get started."

Le Fondre started his career with Stockport County in 2004, before moving on to Rochdale in 2007 and then Rotherham two years later.

In 2011, he moved to Reading, where he scored 12 goals to help the club to Premier League promotion. He found the net 12 times in the 34 top-flight appearances as the Royals were relegated after winning just six games.

"Scoring is what I'm about. I've often got into double figures during my career, although looking back at last season it's one I really wanted to score more in," he told the Cardiff City website.

"They are the high standards I set myself and now the aim is to do that with Cardiff City."

Reading director of football Nick Hammond told the club's website: "I'd like to thank Alfie [Le Fondre] for everything that he has done for Reading. His application and attitude have always been first class.

"We are all disappointed to see him go but in these challenging times this is a vital and necessary deal for the club and a deal that makes financial sense for both the club and the player."