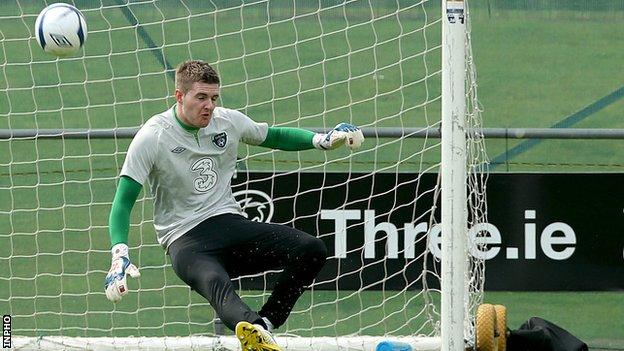 Teenage Manchester City goalkeeper Ian Lawlor has been drafted into the Republic of Ireland squad for their remaining summer friendlies.

Lawlor, 19, has been handed his first call-up even though he has yet to play for Manchester City's first team.

Newcastle keeper Rob Elliot is unavailable for Saturday's friendly against Italy because he is getting married this weekend.

That left David Forde as the only keeper in Martin O'Neill's squad.

Therefore, O'Neill has added under-21 international Lawlor to his squad.

Elliot will return to the Irish squad for the games against Costa Rica and Portugal in the US.

Coventry keeper Joe Murphy has been added to O'Neill's squad as cover for the game against Italy but will not travel on to the US.

Derby trio Richard Keogh, Jeff Hendrick and Conor Sammon were due to meet up with their international team-mates on Monday evening after taking part in Saturday's Championship play-off final defeat by QPR.

Kevin Doyle, who was a member of the victorious QPR team at Wembley, will link up with the Irish squad on Friday.

"He's a fantastic player. He's probably been one of Derby's best players, if not the best player, this season," said O'Shea.

"It's just one of those things in football. His disappointment was clear to see for everyone, and if he comes into the squad, it will be great if we see him because we will pick him up."

Richard Dunne starred in QPR's victory and while he has made himself unavailable for the Republic's friendlies, O'Shea has few doubts about what the veteran defender still has to offer.

"He had his magnet hat on again. Everything was just directed to him and he was in the right position, experience, cleared it all away," added O'Shea.

Sunderland defender O'Shea, 33, could play his 50th game of the season against the Italians before heading off for a well-earned rest after being excused Ireland's trip to the United States.