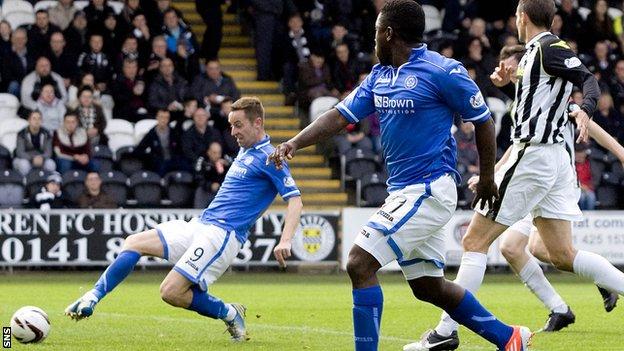 That'll be that then. The first SPL season since the 'F' was inserted has come and gone.

We've had the titles, the promotions, relegations, the play-offs and the back-slapping awards ceremonies.

But for me, the pouring out of plaudits doesn't quite end there.

There have been some outstanding playing performances in the recently-completed campaign which have slipped under the radar, and I reckon they deserve recognition.

Premiership, because that's the league I've spent most of my weekends watching in the last 10 months.

And my definition of 'unsung'? Well, anyone who's not featured in the nominations for the two main Premiership Player of the Year awards, or who wasn't selected in the PFA Scotland team of the season.

So that rules out World Cup-bound Fraser Forster as goalkeeper.

I have four contenders to be my last line of defence.

Dean Brill has survived the pressure he's put under by his surname and has been a solid citizen in goal for Inverness. There's sure to be a queue forming to sign Jamie MacDonald after a heroic season for Hearts ended with him being freed.

I think St Mirren's Chris Dilo merits a mention. He's only 20 and hasn't played that much, but he looks pretty promising to me.

Let's stop faffing about, though. Alan Mannus is my choice as keeper. His mistakes tend to stand out because he doesn't make too many of them. And the St Johnstone goalie ended the season with a Scottish Cup winner's medal.

So did my right-back Dave Mackay. He'd been a suffering semi-final Saint for long enough and his amazing consistency makes him a stick-on in my back four.

One for the future has to be 19-year-old Callum Paterson who's played most positions for Hearts, but looks a great prospect as an attacking full-back.

Next to Mackay at the back, I'm having Gary Warren. In the unlikely event that I was in the trenches, I'd probably want the Inverness central defender alongside me. He's the ultimate unsung hero.

And I'm going for a Highland double act in the middle of my defence. Ross County's Scott Boyd gives the impression, like Warren, that running through a brick wall for the cause wouldn't present a serious problem.

Now I realise I may not have plumped for a ball-playing centre-back, but I'm a big fan of defenders who simply defend.

And what they do allows my left-back to go on the offensive.

Few people, apart from his former manager, have been singing the praises of Scott Brown. He makes Celtic tick and he's a key component in the Scotland team

And that's the big strength of Celtic's Emilio Izaguirre. There are weaknesses about his defending but he supplies attacking width and good delivery.

The Dundee United pair of Paul Paton and John Rankin have to be knocking on the door. So is Richie Foran, who's the beating heart of the Inverness team.

But wait a minute. Few people, apart from his former manager, have been singing the praises of Scott Brown. He makes Celtic tick and he's a key component in the Scotland team. He's in.

What I need alongside him is another club captain. Maybe one with silvering hair (taught him all he knows).

Yes, Motherwell's man for all seasons Keith Lasley gets the call. He sums up the remarkable campaign the Fir Parkers have had.

Those two will allow my front four to do whatever they fancy.

And that's an instruction that seems to suit Kallum Higginbotham down to the ground. He's an exciting talent and his goals and assists went a long way to keeping Partick Thistle in the top league.

If you substitute St Mirren for Thistle in that last sentence, the name of Kenny McLean comes to mind. There's an elegance about the 22-year-old Saints midfielder and there aren't many sweeter strikers of the ball around.

And just to confirm your suspicion that there's a clan connection to my picks, Steven MacLean is in there as well.

St Johnstone would have finished higher than sixth I reckon, had he not missed three months with injury, but this highly intelligent player was still back in plenty time to score the Cup final clincher.

Steven can play in behind my main striker. And, remember, before I complete my alternative XI, I've had to count out attacking talent like Stuart Armstrong, Peter Pawlett, Kris Commons, Nadir Ciftci, Stevie May and Kris Boyd.

Three names are in the frame to play the striker role. Celtic's Anthony Stokes ended the season in top goalscoring form. And the finishing of John Sutton was a big factor in Motherwell claiming runners-up spot.

But my lone striker is Billy McKay. The Inverness front-man certainly knows the role well and, despite being isolated up front in so many games, he's topped the 20-goal mark for the second successive season. McKay is a natural-born finisher.

Two M(a)cKays to go with my two M(a)cLeans but, you'll notice, only one Izaguirre.

The one certainty about that selection is you'll disagree with some of it. Maybe all of it.

But it does make you think about some of the top performers from the season gone by, outwith the usual suspects. Unsung no more.